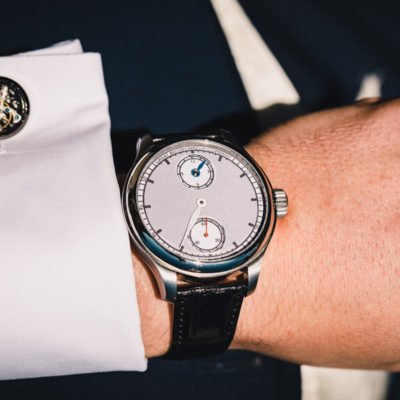 After a long break from not updating this website, I thought I’d let you know what I’ve been up to recently. My first hand-made watch is finished! It’s been over 7 years since I started on the path to become a watchmaker, but I can finally say that I am one now – having made my own watch.

The final touch is the dial, which is at the dial makers at the moment. I had hoped to make the dial myself, and I may at one point in the future. For the moment I just wanted he watch finished.

I will do a full post about the watch and what parts I’ve made made and adjusted, but roughly the watch it one third hand-made, one third customised, and the final third original. There’s still a lot to do though, but it is very satisfying to just have it finished.

Some of the parts that are 100% hand-made include: 4 wheels, 13 screws, the case, a second mainplate that sandwiches the new wheels in place, the winding stem and the balance staff.

One of the most rewarding of those opportunities is that I now have two of my own apprentices who I am training to become watch technicians and another two watch technicians who are training to become watchmakers. I have designed a 5 year course for them to follow, which will take them from zero background in the industry to being a commercially capable watchmaker able to work on all modern, and some vintage, watches.

I also have big news in that I got married in October 2018. I was lucky in that I was able to use some of the same metal working skills I had learned when I was training to become a watchmaker to make our wedding rings – giving them a very personal touch.

Hopefully in the next few months we will be moving into our new home The benefit of which is that I will have my own dedicated workshop; with the potential to expand in the future. There are still many parts of my watch that I am not satisfied with and I will continue to work on improving it.