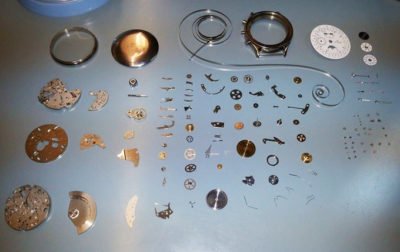 It’s been an interesting and unexpected journey in becoming a watchmaker. If I knew at the beginning what I would have to sacrifice to get to where I am now, would I still have gone ahead? Damn right I would have.

Watchmaking is a fabulous career. I always look forward to and gain incredible amounts of satisfaction from my work. There are very few jobs where you can say with complete certainty what you’ve achieved at the end of each day; real measurable productivity. I can take an old, beaten and broken watch, bring it back to life and make it run and look like it was new; and thrill someone to bits in the process.

There have been some definite hardships along the way, and probably the biggest challenges of my life. I’ve had to look long and hard in the mirror and rediscover who I am, what I stand for and what motivates me.

On the journey to becoming a watchmaker I’ve met some of the most brilliant and wonderful people in my life, and sadly also the absolute worst. Looking at this list below it probably looks like a straightforward or easy set of achievements from the outside, but along with the triumphs, support and guidance there has been tremendous turmoil.

Thankfully I’m a positive person. I survived 8 years at the sharp end of the stick in China, and so grew a very thick skin. Weakness shouldn’t keep any of your attention.

You just need to keep your head up, focus on the future, stay positive and keep moving forward.

Just because some people in this world are awful doesn’t mean you have to be too. Feel blessed for what you have.

When life falls apart you always pick up the best pieces! Whatever’s left behind wasn’t worth keeping.

This doesn’t work as a metaphor for watchmaking though! When a watch falls apart you need to pick up ALL the pieces. Hehe. So if you’re looking to be a watchmaker get used to the idea you’re going to spend a long time on your hands and knees searching for those tiny parts you’ll inevitably drop!

Below is a chronological list of the path I have taken, along with some links to articles and pieces I’ve written along the way. As the journey continues, I’ll update it as necessary.

MY JOURNEY TO BECOMING A WATCHMAKER

May 2012 – Completed my 1st Year BHI exams, and left the School of Jewellery

Sep 2012 – Started as a full-time WOSTEP student at British School of Watchmaking; sponsored by the Swatch Group

Jan 2013 – Awarded a bursary from the George Daniels Education Trust

May 2013 – Completed my 2nd Year BHI exams, and left the British School of Watchmaking

Jan 2014 – Awarded another bursary from the George Daniels Education Trust

This was a big moment for me to actually have the job title of watchmaker. It was under 3 years since I was first aware that watchmaking was a profession.

Aug 2015 – Picked up my MBHI award, along with the award for the overall best results worldwide. The 5th BHI award I’d won