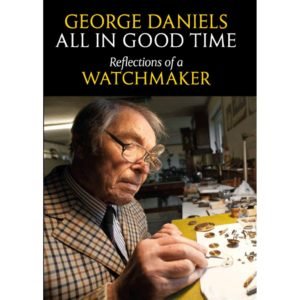 Book Review: All in Good Time, by George Daniels

I picked up the latest edition of George Daniels’ autobiography, All in Good Time.

It’s quite an expensive book for its size, I paid £35 for it, but its 208 pages and numerous photographs make it seem worthwhile.

Sadly George died in 2011, and I never had the opportunity to meet him. I had heard a fair few rumours about his character, most of which involved him being something of a grumpy old man, but then there were people who spoke incredibly fondly of him and talked about how kind and generous he was.  So I thought that by reading his book I would get a more informed view of what he was really like.

The man’s acheivements are extraordinary, and I think that it is fair to say that no single watchmaker has, or will ever, put in as much effort towards their profession as George did. A large part of the book talks about his childhood, which for all intents and purposes was miserable. He was unloved and uncared for, and had no bond between his parents or any of his many siblings.

He had scrappy shoes, just one set of clothes and wild hair. People generally treated him with contempt and he had few friends.

What this seems to have done is allow George to build up a defensive wall, and enable him to transmit himself into a little bubble of his own whenever he was concentrating on things. He would work 5000 hours a year, which is more than double what most people are capable of, and his work was always intense and productive.

But after finishing the book I felt sad for him. He had been so successful in some areas, and then such a complete failure in others. The book’s content does well to trace his path towards his final goal of getting the reluctant Swiss to accept his co-axial escapement idea, and George is clearly very proud and matter-of-fact about the importance of his work and achievements, but it is what is missing that is the most telling.

George’s wife for instance gets about paragraph written about her. His daughter, just one line. There’s no mention of the joy of the birth of his only child, or other tales of family holidays, or happy memories. Previously I had heard the rumour that when his wife left him, he took 2 weeks to notice, as he was eating and sleeping in his workshop. At the time I thought that couldn’t possible be true, but after reading his own account of his life, it sadly does seem possible. I think that you could say that he sacrificed everything for his watches.

His many cars get whole sections of the book dedicated to them, and it seems that George was as passionate about them as his watches.

I think that its fair to say that the book will make the reader really understand the patience and commitment of the man, however it seems that his harsh childhood had made him learn to love things, ideas and accomplishments and not people.

Never the less, I did enjoy the book. It is a fascinating read about a truly fascinating man, and I would recommend it to anyone interested in horology, or even the tale of rags to riches through hard work and dedication.