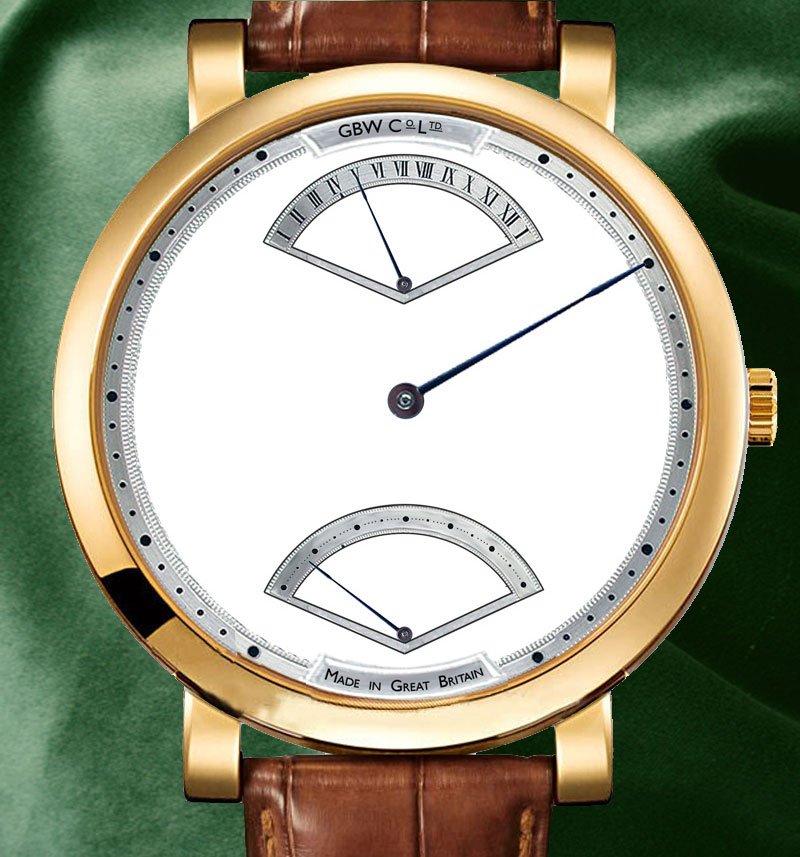 In September 2012, I  moved to the British School of Watchmaking in Manchester. We were soon told that we would be required to create our own watch, based on an Eta 6498 movement. This is fairly big movement, that is more suited to a pocket watch, but big watches are fashionable at the moment and so it will look good on the wrist too.

I had become interested in the retrograde system. This is where a hand moves across an angle, and then when it reaches the end it snaps back to the beginning.

I also still liked the idea of the regulator layout, and hoped that I could somehow encompass both ideas together in one design.

My first thought was to have a regulator layout, with each hand being retrograde. I also wanted the dial to be engine turned. I quite liked the design, but since I’d started on my watch designing journey my Photoshop skills had improved, so I decided to give it a bit of an overhaul. Most of the bits that I used are adapted from George Daniels early pocket watches, each of which had a retrograde hour hand. After looking back on the designs, I realised that the first one with the three retrograde dials looked too much like a valve gauge, whereas the other two worked better. I thought the one with just the centre minutes worked best.

But what about the practicality of it? I searched high and low for a design of how the retrograde system works. But there was nothing.

I was able to see the insides of one of George Daniels’ watches in his book Watchmaking, and so I made a rough design based on what I could see. 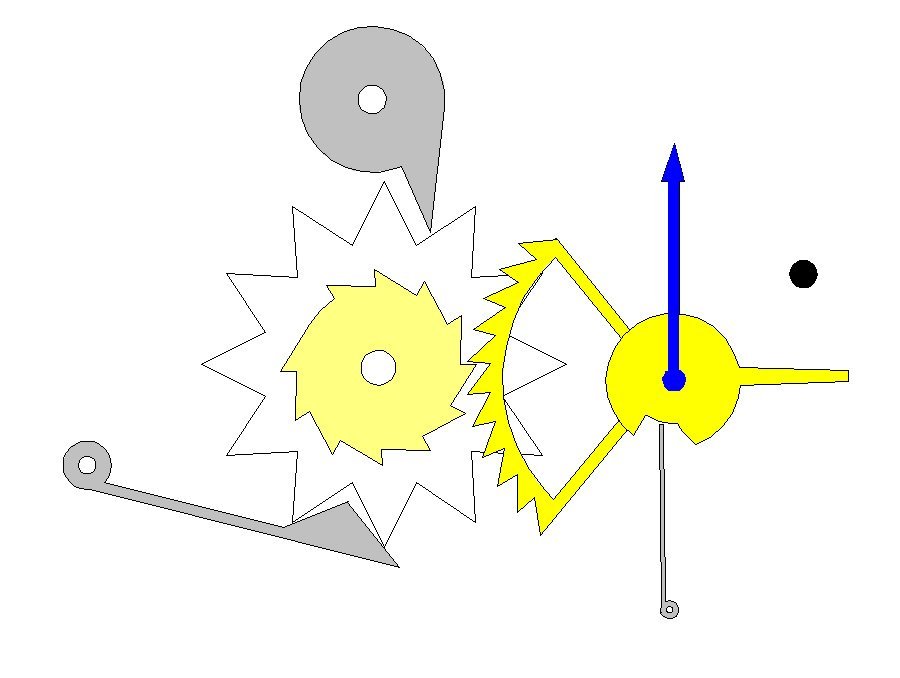 Here the silver wheel at the top with one finger is attached to the centre wheel, and is therefore turning once an hour. Every hour it pushes the star wheel, which has a ratchet wheel (light yellow) joined to it. The silver spring at the bottom ensures that the star wheel will turn in a sudden jump. When the ratchet wheel turns it lifts the rack (dark yellow) which in turn moves the hand (blue).

When the hour reaches 12 and the hands needs to jump back, there is a tooth missing from the ratchet wheel. This means that the rack will fall. The spring underneath the hand will ensure that when the rack falls it will spring back towards the left, with the arm on the rack and the black stopper making sure that its movement is limited.

It seems like it should work. So I decided to see what it would look like in the movement. I thought that to get the seconds hand to jump each second would cause too much friction, and so by recycling the same system as the hour retrograde system, and by adding a wheel with 12 rather than 1 fingers I could get the seconds to jump 12 times a minute, or once every 5 seconds.

But alas, this wouldn’t work. Or at least it wouldn’t work on a watch that you wanted to keep decent time. The 4th wheel which runs the seconds hand is very low torque, and it is joined directly to the escape wheel. Any interference in its movement would have a serious effect on the watch’s timekeeping.

There had to be some way of running the seconds hand without slowing the watch down.

The first idea was to add a remontoire. However, this looked impossibly complicated. A remontoire is a device which winds the escape wheel directly, the idea being that is bypasses the rest of the watch’s train.

Again there were no designs I could really find to see exactly how they worked, and infact there are many different designs which have been used over time. I thought that this way was a good idea, but the project which was already ambitious, was starting to get overly complicated. My primary goal was to get the watch finished.

The next idea was to drive the seconds hand independently through a separate train driven from the centre wheel. This would mean that the 4th wheel would not be interfered with, and therefore the escapement should function as normal. I just added in wheels for the sake of there being wheels for the moment and didn’t bother with train counts or actual practicality 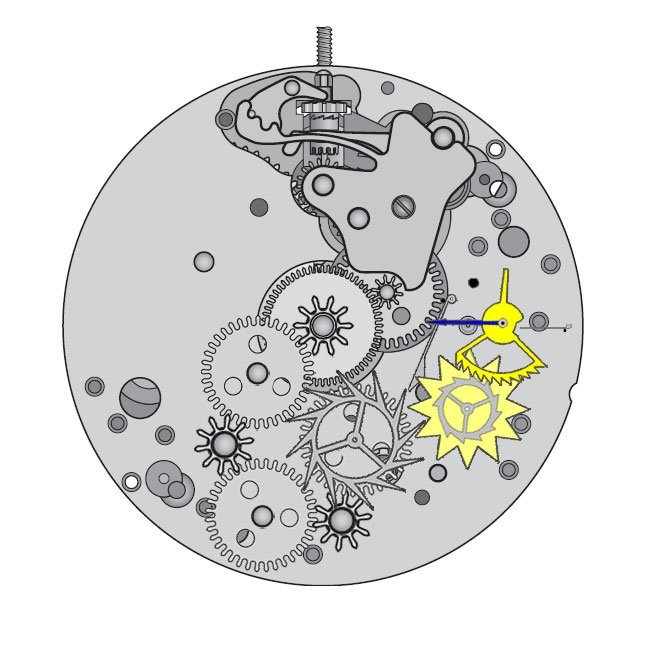 As that seemed to work I went on to add in the part for the retrograde hour. The design now also added in an additional 3rd wheel. This would be driven from the centre wheel and would then drive a secondary 4th wheel itself. This should keep the ratio of teeth the same as the main train and ensure that the 4th wheel turns once every minute. 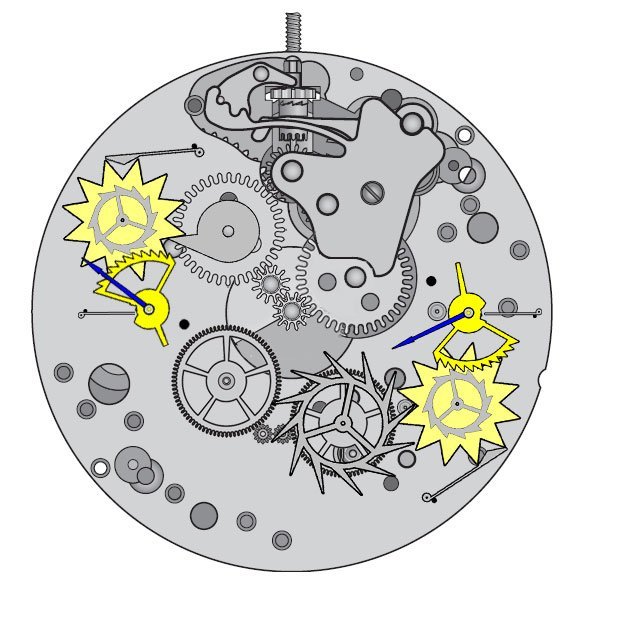 The extra 3rd wheel can be seen here, as the jewel which is South East of the centre wheel. 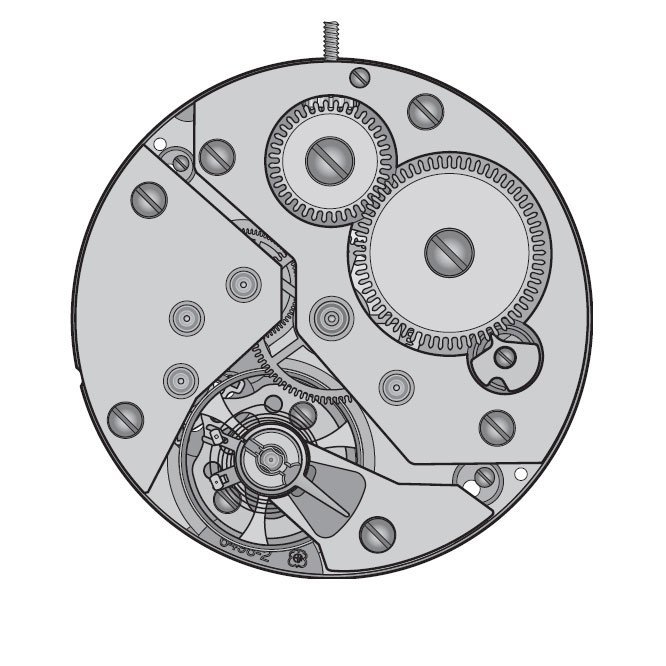 After some further refining, I added in some jewels to the additional wheels. They would be centre wheel jewels and would mean that each of the new wheel could run on a post, and would not need to have pivots or be jewelled top and bottom. 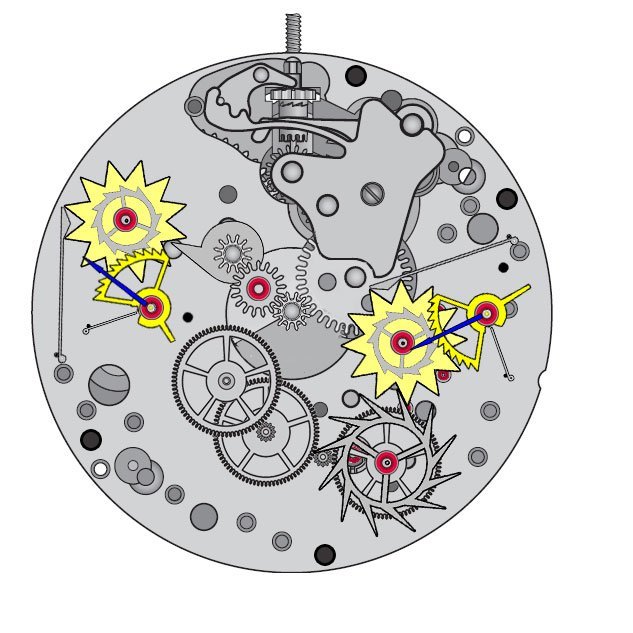 I then would need a cover to hold all of the new wheels in place. This cover would go on the dial side, with the dial sitting on top of it. 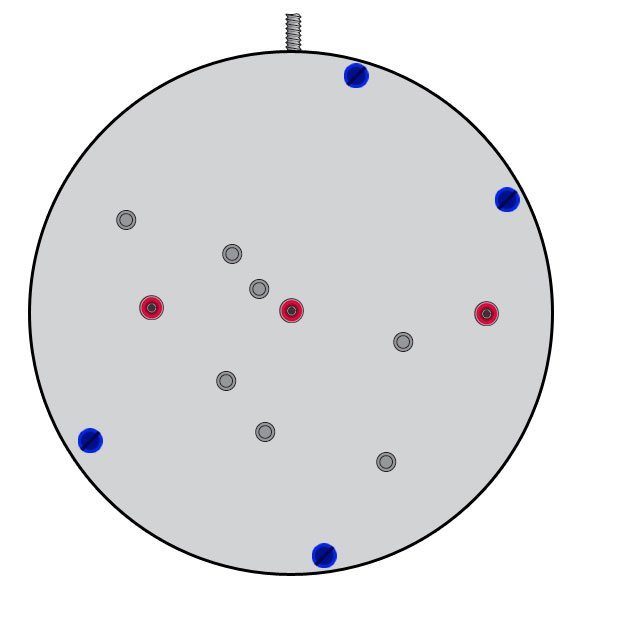 The original layout, at the top,  can be compared to my new designs. I liked the idea of engraving the additional dial plate with a design, such as a flag. It could also be a message, or something else which someone wanted to keep secret or close to them. The image or writing would of course be hidden, but I liked the idea that someone could look at the dial and know that beneath it was a special message for themselves. 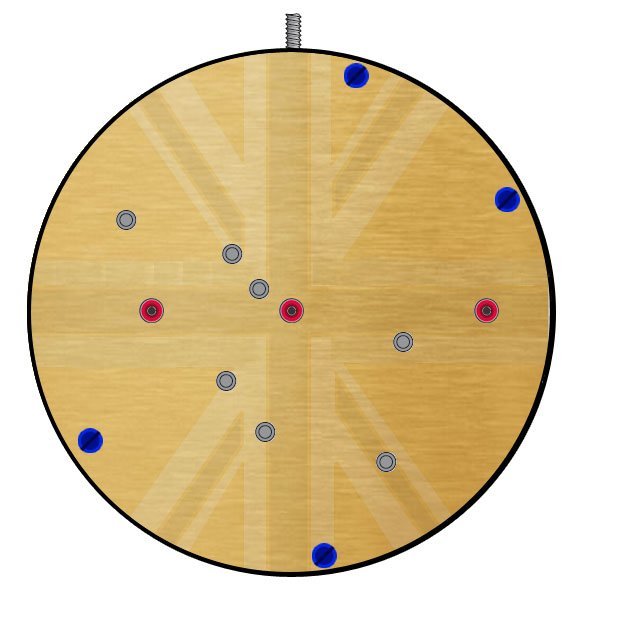 For the back plates, I would like to keep it as a 3 quarter plate with a balance cock. This is a very English way of laying out a watch, and so it seemed appropriate. I would also like some writing on the back. I also thought about putting in the names of some British contributions to horology that still are used in the watch on the back. This image is still very early, and I will no doubt change it at a later stage. 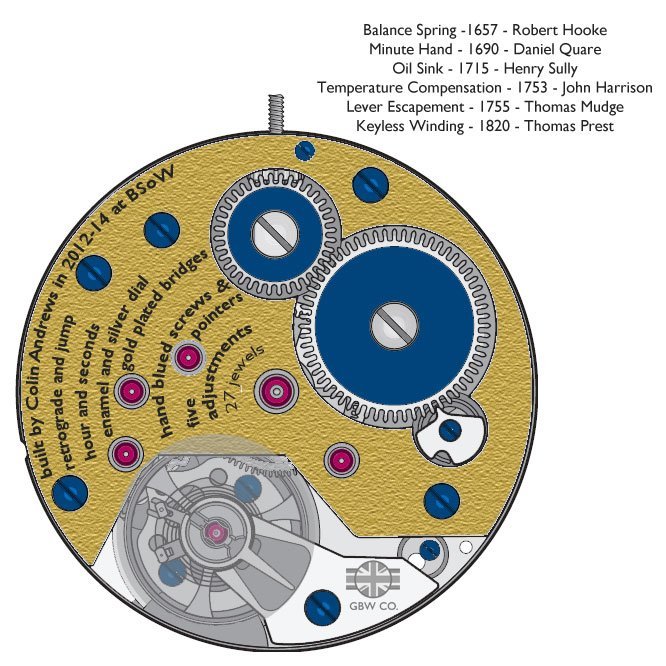 The final design of the watch (unless it proves too ambitious). I decided that the engine turning was going to be too much, as I would never have the time to train myself to do this, and I would never be able to afford to pay someone to do it. So it will just be kept as the plain white enamel. I’ve had that design for a few months now. I still quite like it, as I feel that it’s important to judge a design after it’s had some time to sink in. Often when you first draw something, you think it’s amazing, as in the case of my first design. It is only later when you look at it with less biased eyes that you realise it may not be quite good enough.

I think that it’s the cleanliness of the dial that is most appealing. The pointers just point, and the markers just mark the time. The branding is inobtrusive. It hints, but it doesn’t make any proclamation. I feel that I would love to wear the watch, and that makes me excited to want to create it.

Who knows, I may well change my mind later on.

I made a detailed plan of all the parts I would need to make, amend and design for the watch. The conclusion was that I estimated I would need:

The reality was that we have only from 5pm-6pm Monday to Thursday to work on our own stuff, and so including time we would be allowed in class I would probably have 100-200 hours at the most to work on this, and so sadly the design was too ambitious for me to complete in the time scale.  So what could I do instead?

Well I started out with the idea that I wanted to create a regulator layout, and so that was where I returned. The 6498 movement already has a sub seconds at 6 o clock and so I would just need a couple of wheels to move the hour wheel from the centre to the top. Much easier. I also thought about having the dials sideways. This could also require me to have a couple of wheels to move the sub seconds dial, but wouldn’t be too much hassle. I’m not decided yet on which one I prefer. I will still need to make the hands, dial, rework the back plate and also the case. Still fairly ambitious, but certainly more acheivable.

Work has begun. It’ll be a slow process as I have a few other things that will have priority (my exam work mostly) but you can follow the progress here; Making My First Watch