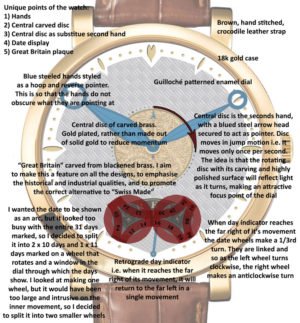 This is where it all started. I had not long decided to get into horology, and had not yet started my studies in Birmingham, but I designed my first watch. It looks pretty awful, but I was quite pleased with myself at the time. This was around August 2011.

This first image I drew in Photoshop. I later replaced the strap and case with a Photoshopped version. The case was from an A Lange and Sohne watch, which I adjusted to make the lugs more square to the bezel.

The central part, which is a rotating disc acting as the seconds hand, is taken from the back of a Roger Smith watch, as is the engine turning on the dial. I made an overlay of my thoughts on the watch. I was particularly pleased with the date part, as it was the first ever attempt I’d made at designing a functioning complication. As far as I am aware it is unique, and no other watch has a date function of this design. Bear in mind that at this stage I had absolutely no idea how a watch worked.

Despite the early thoughts, some of the concepts have carried through into my later designs. This is the 2nd watch I designed. I wasn’t sure of the theme of watches I wanted to make, and so the idea was that I would do a design for each different period of history, and then see which designs I liked the most. This is Art Deco. I think it captures the period quite well.

It has a digital display, a crown at 12 o clock, and a second hand at the top that moves from left to right for 0-30 seconds and then left to right for 30-60 seconds. The idea was that it would move it 5 second jumps, and so look like an elevator display from the 1920s. In the end though, I was more interested in doing something clever with the watch. This is my fan design. Basically the watch’s hands are the arms of a fan, that open and close, revealing an image. In this case the galaxy is painted on the dial and the sun is the fan. Once the fan reaches it’s full stretch, the hour and the minute hand change functions, and therefore the fan closes itself back up again. Once the hands reach back together, they would then flip over and when the fan opened again it would show an image on the reverse side, in this case a moon. Of course, the design is probably far too complicated to make into a watch, and too delicate, but I liked the intrigue of the idea.

Next I thought about another theme, steam punk. This is based on the idea that there is no electricity, and all the world’s functions are still powered by steam.

I liked the idea of having a watch with a shutter, like an aperture from a camera. The shutter is always closed, unless the wearer pulls the button on the side to check the time. This in turn opens the watch and winds a mechanism, which will tick down and close the aperture back up, therefore hiding the watch dial again. I do like this idea, and perhaps may try and incorporate it into a working design in the future.

The watch dial is from a Nomos I think. By this stage I had started studying at Birmingham, but still had a very basic idea of horology and the functioning of watches. It was around December 2011. The next idea was based on the Chinese Yin Yang philosophy.

I liked the idea of having two movements within a watch, and having some sort of differential gearing system that would output through the hands and dial the average of the two movements. The idea being that the gains (Yin) of one movement would be offset by the losses (Yang) of the other movement, therefore creating a sort of balanced time that was more accurate that either individually.

You can see it was early beginnings, as I drew a tiny escapement, and also incuded an intermediate wheel. We’d almost exclusively looked at clocks until this point. This one is based on the same principal design, but just has one movement. The train at the bottom, linked to the device which looks like it has flags on it, is supposed to be a remontoirre. I’d no idea how one worked, and so it’s basically just a series of wheels that looked something like a drawing in a book I’d read.

The escape wheel is also from an anchor escapement, another clue that we had only looked at clocks until that point. Next: Refining my Watch Designs