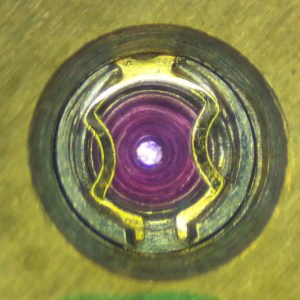 The balance wheel pivots are the thinnest in the watch, as they are the lowest torque. However they also carry what is often the heaviest wheel and so therefore are very vulnerable to break if the watch receives a shock. For pocket watches and clocks this was not a huge problem as they were generally kept safe, but a watch worn on the wrist spends most of its day on the move.

In 1790 Abraham-Louis Breguet invented the Para-chute device which was a spring which helped to absorb any shock to the balance pivots and keep it from breaking.

The modern day shock spring is based on the same principle; however it was not until the 1950s that the anti-shock system became widespread. Before this a broken balance staff was one of the most common fatal problems a watch would face.

Nowadays the shock system is so successful that a balance staff is rarely broken, and most damage can be traced to direct interference from someone who has opened the watch. This has led to current balance staffs actually being of a lower quality than those made 30+ years ago, with even the top tier watch houses choosing to chemically burnish the pivots with acid to save costs rather than burnishing them by hand as in years gone by.

Burnishing is where you rub a surface of metal smooth, compacting and hardening it in the process. All pivots are burnished to reduce wear, and as a result do not bend out of shape but shatter when force is applied

Modern day shock systems also help reduce the friction on the pivots, reduce contamination and oxidisation of the oil and ensure that the pivots are always centred.

The oil sink with a shock setting is usually reserved for the balance wheel pivots; both top and bottom, although on some higher end watches it is used elsewhere, specifically on the escape wheel.

The Anatomy of the Watch Anti-Shock System

As with most things in horology, everything has many names:

Function of the Parts in an Anti-Shock System


Anti-Shock Spring
The spring is usually made out of brass, or a similar metal with elastic properties. It needs to be strong enough to absorb any shock and then return the Cap Stone and Chaton back into place

Cap Stone
The Cap Stone is made out of synthetic ruby (aluminum oxide). It is curved at the top and flat on the bottom with a highly polished surface. It is immediately recognisable as it does not have a pivot hole in it. This holds the oil in place and in most modern watches is coated in a material (usually Fixadrop/Epilame) to prevent the oil spreading. It sits on top of the Chaton and is held in place by the Anti-Shock Spring and also to the Balance Staff Jewel through the capillary action of the oil

Balance Staff Jewel and Chaton
In almost all cases the pivot jewel will be friction fitted into the Chaton. Together they sit loose in the Setting, and are held down by the Anti-Shock Spring

Setting
The Setting is fixed to either the mainplate of the watch or the balance cock depending on whether it is the top or bottom Setting. It has the lock system that the Anti-Shock Spring uses to hold itself in place. It is shaped so that the Chaton will want to return to the centre when pushed down by the spring in normal conditions after a shock.

There are currently two main companies that make shock settings; Incabloc and Kif. Of these the most common setting in use is the Incabloc, mainly due to its use in ETA movements.

Incabloc is an independent company and Kif is part of the Acrotec group. There is a story that Paraflex was formed due to an argument Rolex had with ETA (now part of the Swatch Group), and so they decided to make their own “superior” shock system as a result.

The Evolution of the Watch Anti Shock System

How an Anti-Shock System Works

The Chaton sits loose in the Setting, with the Balance Staff Jewel friction fitted into the Chaton and the Cap Stone sitting on top of the Chaton. The Anti-Shock Spring applies a downwards force on the Chaton and Cap Stone, holding it in place.

If a shock is received then the balance staff will push its shoulder against the Chaton and it will move both the Chaton and Cap Jewel with the Anti-Shock Spring flexing to allow this limited movement. This small movement absorbs the force of the impact in a safe way, thereby protecting the vulnerable balance staff pivot.

Once the shock has been absorbed, the spring’s elastic properties will mean it will want to return to its original shape and by doing so will push the Chaton and Cap Stone back downwards. The Chaton and Setting are shaped so that this downwards movement will guide the Chaton back towards its natural central position.

The educational website clockwatch.de has a wonderful Flash animation where you can apply a shock and watch how the Anti-Shock System works. You can follow this link: http://www.clockwatch.de/index.html?html/tec/sto/inc.htm

Examples of Anti-Shock Systems and How to Remove them