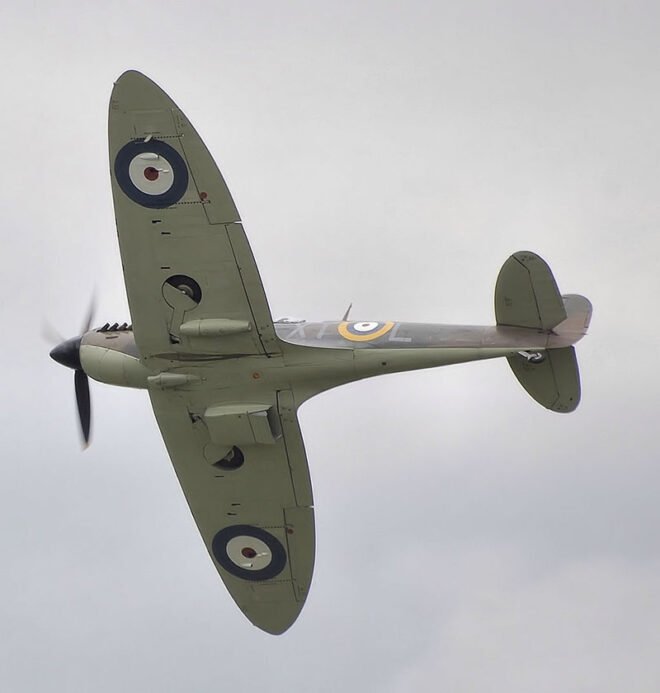 Sortie 7 – The Battle of Britain

In this Sortie we’re going to take a look at the Spitfire’s most famous undertaking; the Battle of Britain.

By the start of July 1940, Poland, Denmark, Luxembourg, the Netherlands, Belgium, France and Norway had all been defeated by the relentless Nazi war machine. In less than a year since war had broken out, Britain, the last remaining member of the Allies, stood alone.

Hitler remained convinced that, when faced with certain defeat, Britain would agree to negotiated peace terms. However Churchill stubbornly refused to submit and vowed to fight on.

The German high command planned for a 4 stage invasion, under Operation Sealion, with which to deliver the killing blow. The first stage in their plan was to defeat the RAF’s Fighter-Command, and gain air superiority.

Defending against the might of the world’s most powerful and experienced air force, were just 1200 RAF Fighter-Command pilots. Throughout what would be a 16 week long battle, an additional 1800 fighter pilots would take part in the conflict. These 3000 men, only 20 years old on average, are now named “The Few”; later to be immortalised in Churchill’s famous speech.

As in the previous Sortie (if you missed that you can catch up here), some of the photos included below were taken by my wife’s grandfather, Clifford Page. He served as an aircraft engineer with 610 Spitfire Squadron during the Battle of Britain. The quotes are taken from his writing on the back of each photo, and some I have had colourised.

As the Battle began on 10th July 1940, the Air Ministry’s own figures show that they had 344 Hurricanes, 226 Spitfires and 24 Defiants operational, just 594 aircraft in total, with an additional 347 in reserve.

Facing them were over 2000 Luftwaffe aircraft – half of which were fighters.

The RAF had 3 types of single engine fighter, each powered by the Rolls Royce Merlin engine.

Hawker Hurricane: Making up around two thirds of the total force, 1715 Hurricanes were used throughout the Battle of Britain. The Hurricane was manoeuvrable, simple to service and repair and easy to fly.  Its fabric covered wings also meant it could take a lot of punishment. 8 machine guns were mounted in the wings.

Boulton Paul Defiant: This often overlooked two-seater fighter had a pneumatically powered turret in the rear seat armed with 4 Browning machine guns; similar to the rear gunner in a Lancaster bomber. Unable to effectively fire forwards, it could not compete with the modern fighters. Sadly, by the end of August 1940 half of the Defiants had been shot down. They were subsequently relegated to night-fighter duties; a role they performed with distinction during the Blitz.

Supermarine Spitfire: The Spitfire was slightly more agile and faster than the Hurricane, but it was a more difficult aircraft to build and service, making it more expensive to produce and run. During the Battle of Britain, almost all Spitfires were Mk1 models built at Supermarine’s headquarters in Southampton. Later some Mk2 variants did make their way to front lines, produced in the new Castle Bromwich factory and fitted with an upgraded engine. Each type was armed with 8 Browning machine guns, with 300 rounds per gun; giving just over 15 seconds of sustained fire.

The Spitfire was designated as a fighter interceptor, while the Hurricane was assigned to tackle the bombers. However the reality of battle, and the confusion that followed an engagement, meant that that these roles were often interchangeable.

Bf190E:. At the time, the Bf190E was the world’s most proven single engine fighter plane. Designed by Willy Messerschmitt at the Bayerische Flugzeuwerke factory in Munich, it was referred to by the Allies as the Me109.

Already on its 5th version, E, the 109 was powered by a V12 Daimler Benz engine, fitted upside-down, and armed with two formidable cannons in the wings and two machine guns on the nose.

Next to the Spitfire, the differences in the capabilities of the Bf109E were marginal. The 109 was faster in both a climb and a dive, but lacked the turning ability of the Spitfire. The largest discriminating factor in the performance of each aircraft was the pilot’s ability.

This was where the Germans started the Battle with a huge advantage. The 109 was flown by experienced pilots who had seen combat during the Spanish civil war, the invasion of Poland and the Blitzkrieg through the Benelux and France. Many of the RAF’s pilots took to the skies with no prior operational experience.

Bf110D: The big brother of the 109, the Bf110 was a twin-engined heavy fighter armed with two 20mm cannons and four 7.92mm machine guns in its nose. Also designed by Willy Messerschmitt, the Bf110 had poor manoeuvrability compared with the nimble RAF fighters and after heavy losses it moved into a night fighter role.

At the beginning of the Battle of Britain the tactics of RAF Fighter-Command were outdated. Pre-war logic had assumed that any bombers coming from Germany would have no fighter cover due to the distances involved. The rapid fall of France and the use of her Northern airfields was completely unanticipated.

In July 1940, the fighter squadrons were sent up in 4 sections of 3 aircraft each; 12 aircraft in total. Each section would fly in a very tight V or Vic formation. The close proximity of the aircraft to one another meant that only the lead aircraft could scout for enemy aircraft, with the two wingmen having to put all their concentration into just staying in formation. With such a small space to manoeuvre, the pilots were unable to perform the sharp turns that their aircraft was capable of.

The pilots quickly learned the hard way of the failings of these tactics, and often the first knowledge of enemy contact was when a wingman was shot down. As the official doctrine would take years to adapt, the pilots took it upon themselves to improve the situation. They studied how the German pilots flew, and learned from the other Allied nationalities that were fighting alongside them. Many of the Polish pilots had achieved great success in the early days of the Battle of Britain, as their training and tactics had been specifically designed to counter the short range German fighters.

Being engaged in near constant fighting was not the best arena to change tactics, but necessity led to the Finger-Four formation being unofficially adopted. The distance between each aircraft was increased, and the fighters began operating in two sets of pairs – each with a designated spotter and attacker.

Despite their inexperience, outdated tactics and the overwhelming odds they faced, the RAF pilots proved day after day, sortie after sortie, that they were a force to be reckoned with.

The Supreme Commander of the Luftwaffe, Herman Goering, believed it would take only 14-28 days to completely defeat the RAF. The German pilots crossed the English Channel expecting to face little resistance. Instead, they found a determined and persistent opponent who, even when outnumbered, would aggressively turn to engage their foe.

When the German aircrew returned the next day, they found the same Spitfires and Hurricanes waiting for them. The network chain of radar, organised as part of the Dowding system, with an additional tens of thousands of spotters on the ground ensured that the RAF pilots intercepted their target.

As the Battle of Britain continued, in September 1940 renowned RAF fighter ace Douglas Bader was an advocate for the use of the Big Wing formation. This was a group of up to 60 planes attacking German formations en masse.

Because the large formation took so long to organise, the Luftwaffe had usually already bombed their target by the time they were engaged. However without their fighter escort providing cover, when the Big Wing engaged the bomber formations the results were devastating. One of the largest impacts from such a sustained attack was psychological, as Nazi propaganda had been persistent in insisting that the RAF was a spent force and just days away from collapse. 60 aircraft in just one location proved that to be false.

Douglas Bader, who had lost both of his legs in a pre-war flying accident, would go on to score 22 aircraft kills. His Spitfire was later downed over France and he was captured. Despite his disability he incredibly managed to escape captivity numerous times, before being sent to the infamous Colditz Castle, where he remained until the end of the war.

Two years after the Battle of Britain, in 1942, Fighter-Command officially adopted the Finger-Four formation.

The Battle of Britain ended on 31st October 1940, 113 days after it had begun. Of the 3000 RAF pilots to have taken part, 544 would make the ultimate sacrifice. However, the defiant spirit of those few meant that 3,500 Luftwaffe pilots and aircrew were lost, being either killed, reported missing or captured.

Germany had lost her first major battle of the war – and never truly recovered from it. The Luftwaffe had irreplaceably lost some of their most experienced pilots. Despite a constant stream of new pilots and aircraft, the Luftwaffe ended the Battle of Britain with 850 fighter aircraft operational. From a starting position of 1050, this was an overall loss of 200.

In contrast, the RAF was producing 300 new fighter planes each month, and training 200 new pilots – which outstripped their losses. This meant that Fighter-Command had 734 aircraft operational at the end of the Battle – an increase of 140.

Many of the new RAF pilots came from the Commonwealth. They were trained far away from danger in Canada under the British Commonwealth Air Training Plan.

With none of Operation Sealion’s objectives having been met, the plans for invasion were postponed indefinitely. Hitler still believed Britain could be brought to the bargaining table if the population became demoralised. So the Luftwaffe’s efforts moved towards terror bombing. On 31st October 1940 The Battle of Britain was officially over, and The Blitz had now begun. Large population centres – often with no strategic value – were to be targeted.

“Never in the field of battle was so much owed by so many to so few”.

One of the greatest skills of Winston Churchill was his eloquence in finding the right words for the moment; words that have really stood the test of time.

Part of a speech made during the height of the Battle in August 1940, it captured the incredible sacrifice that those men were making, and that the survival of the free world rested on their shoulders.

The British people had “nothing to offer but blood, toil, tears and sweat” and with limited resources were able to throw the Germans back.

When choosing a name for the watch built from one of these incredible and historic machines, “The Few” immediately felt like a fitting tribute.

Next sortie, we are going to look at the legend surrounding the Spitfire. What is it about the Spitfire that makes it the most famous aircraft of the era and why does it still capture the hearts of the public to this day?