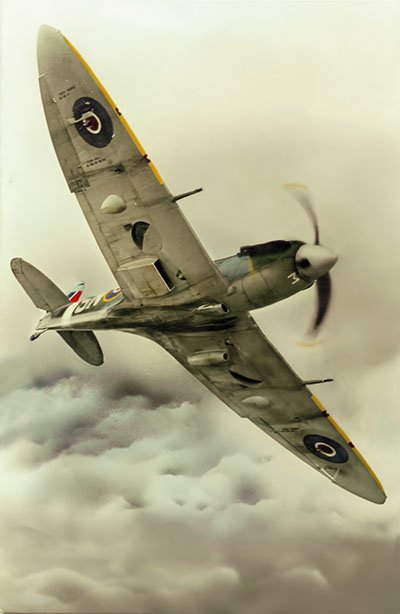 Sortie 8 – The Legend of the Spitfire

During the Battle of Britain, which we discussed in the last Sortie, Hurricanes made up around 2 of every 3 fighter aircraft, and also claimed a higher proportion of the “kills”.

The performance difference between the Spitfire Mk1 and the Hurricane was marginal. Pilots of each aircraft also tended to believe the plane they were flying was the superior of the two. In this Sortie we’re going to examine why the Spitfire today gets almost all of the attention and glory? What is it about this iconic aircraft that still means so much to us today? What turned the Spitfire into a legend?

The name that R J Mitchell, the designer of the Spitfire, wanted for his aircraft was either the Shrew or Scarab. It was Supermarine’s Chairman, Robert McLean, who chose the name Spitfire, after his daughter’s nickname.

Spitfire, in this context, was to describe his daughter being feisty and energetic – like a firecracker. In its use as a name for a fighter aircraft, the 8 machine guns meant the Spitfire – much like a fire-breathing dragon – could also spit fire at the enemy; 13 pounds (6kg) of lead per 3 second burst.

The RAF’s tradition of naming their aircraft rather than using production codes was unusual. But these names have become far more memorable. Today, an aircraft enthusiast may know a Bf109 from a FW190, or a F4U from a P47, but the average member of the public does not.

Another boon for the name, was that the German Luftwaffe pilots were able to pronounce Spitfire easier than Hurricane. “Achtung Spitfire” became a cry over the radio that no German pilot making the dangerous Channel crossing wanted to hear.

Whether the name is used to describe the energy, or the deadly potential of the aircraft, is undisputed that around the world the name Spitfire is still recognised.

The Spitfire is mostly remembered for its role as a fighter to fighter aircraft. The changing circumstances and demands during the war meant that this role widened. A true testament to the versatility of the design.

The impressive speed and service ceiling of the Spitfire meant that it was ideal for photo reconnaissance. Aircraft designated the PR type were stripped of their weapons and instead carried a series of cameras, usually Williamson F.24s. Flying at such high speeds and altitude meant that these PR aircraft could not be intercepted by enemy fighters. With additional fuel tanks fitted, the range of the PR Spitfires could reach 2000 miles; putting all of Nazi occupied Europe within distance of their cameras.

Particularly after the Allied D-Day landings in June 1944, the Spitfire’s role was split. Tackling both marauding fighter aircraft and performing ground attack operations; targeting trucks, static defences, tanks and trains. The Spitfire was very capable in this role. Its explosive and armour-piercing 20mm cannon shells made short work of soft targets. In the role as a fighter-bomber it was able to dive-bomb targets with up to 1000lb of bombs. It could also be outfitted with two 60lb rockets on each wing.

The Luftwaffe’s high-altitude bomber, the Junkers JU-86R, flew at a steady 200mph at 41,000ft. Despite its meandering pace, at the time no Allied fighter plane could operate at such an altitude. This provided the bombers with immunity from interception. In August 1942, after one such bomber killed 48 civilians in Bristol during rush hour, RAF Fighter-Command became determined to find an effective counter-measure.

Two Spitfire Mk 9s and 6 pilots were outfitted for the extreme conditions of high-altitude flying. The Spitfire’s armament was reduced to two 20mm Hispano cannons, the armour plating was removed and even lightweight paint was applied in an effort to increase performance.

On the 12th September 1942, a lone JU-86R was spotted. RAF Pilot Officer Emanuel Galitzine climbed above the clouds in his modified Mk9 Spitfire to give chase. With no defensive weaponry, upon seeing the Spitfire the Luftwaffe pilot immediately dropped his bomb-load and attempted to return to France.

The JU-86R climbed higher, but the Spitfire was able to climb faster. Despite the constant freezing of the cockpit windscreen, and stalling of his engine, at 44,000ft Galitzine managed to score a hit with his cannon on the JU-86R’s wing. Although not shot down, the incident broke the illusion of invincibility. The JU-86R never again crossed the English Channel.

During the Battle of Britain, the Hurricane, Spitfire and the Luftwaffe’s Bf109 all had very similar flight performance. The RAF’s fighters were better in a turn, but the Bf109 could climb and dive faster. The Spitfire was marginally faster than the Hurricane, but the latter was easier to fly.

The Hawker Hurricane was a continued development of earlier Hawker aircraft. It featured a wooden frame covered in fabric – as used in WW1 biplanes. In 1940 it was almost at the zenith of its performance potential. The brand-new all metal Spitfire however had only just started on its journey of upgrades and enhancements.

Throughout the Spitfire’s service during WW2 it underwent major revisions that saw its performance improve exponentially. It is the only Allied aircraft that was used continuously throughout the entire war.

As these performance figures show, the Spitfire at the end of the war was not the same machine that began it. Many of the key characteristics had effectively doubled in just 6 years. This was, and is, unprecedented for any aircraft; and will likely never be bettered in such a short space of time.

Mitchell’s design took to the skies just 33 years after the Wright brother’s world first flight. It proved to be such a solid design foundation that it had 100s of variants made. These included 24 marks and 8 major Seafire variants (the Navy’s carrier-based Spitfire). The Hurricane, in comparison, just made it past its 4th mark before it was retired from service.

The Spitfire’s steady pace of development meant that it always remained a formidable adversary to any opponent. Even the world’s first jet fighter, the Me262, was first shot down by a Spitfire.

Much like how a serrated knife increases the effective cutting surface of a blade, the Spitfire’s iconic elliptical wing enabled the wings to be thinner without increasing the wingspan; this in turn increased aerodynamic performance.

These slender lines and sleek curves of the Spitfire were formed by Mitchell’s obsession with reducing drag. This called for all the rivets to be flush to the surface, which was an expensive and time-consuming business. To demonstrate the importance of these flush rivets to any doubters, Mitchell’s team glued split peas onto the existing rivets. They found that the Spitfire’s top speed was reduced by 22mph; effectively – and cheaply – demonstrating why such details were necessary.

When German Bf109 pilot Erich Meyer was shot down by an RAF fighter during the Battle of Britain, he insisted it had been by a Spitfire. The truth was however that it was a Hurricane that had tackled him. As the Battle progressed, it became increasingly common for Luftwaffe pilots to incorrectly attribute losses and damage to the Spitfire, in what became known as “Spitfire Snobbery”. For the Germans, it seems, it was more acceptable to have been shot down by the RAF’s Spitfire, rather than any other aircraft.

Later, in 1944, the same thinking applied for the Allies in Normandy. Despite comparatively few Tiger tanks operating in the area, in an effect called “Tiger Terror” both infantry and tank crews would often claim that every tank they met was the feared Tiger; which in the case of the Tiger vastly over-estimated the role it played in the war.

It seems a natural human proclivity to assume that the only reason you had been beaten, was that you had faced the best the enemy could offer.

In 1940, as the Battle of Britain raged, RAF Fighter Command was facing severe shortages. To help remedy this they decided they could raise capital from public donations. It was the Spitfire that had already captured the public’s imagination and so it was chosen to be the RAF’s “poster boy”.

Locally based Spitfire Funds popped up around the nation. For £5,000, which was roughly half the cost at the time to produce a Spitfire, the donors had the opportunity to not only make a contribution to the war effort, but also to name their Spitfire. This led to some imaginative names such as; “Dog Fighter” from Kennel Club donations, and “Sky Sweeper” from the Hoover company.

The Spitfire is arguably the most famous and recognisable aircraft in history.

It operated throughout the largest and most destructive war the world has ever seen. The war was, as near as any war has been, an ideological battle between good and evil. While most Luftwaffe pilots were decent people, the Nazi cause for which they fought was not. The Spitfire therefore became our angel in the sky preserving our peace and freedoms, against an enemy that only offered subjugation and destruction.

When we hear the name Spitfire it evokes the romance of pilots that duelled in the sky. Pilots, flying a machine operating at the edge of human technology and endurance, in a life and death struggle with an equally determined foe.

The Spitfire marvelled those that flew them, was adored by those that saw them and caused fear in those that faced them.

It was an aircraft that became an extension of the pilot’s body, allowing the individual skill and daring of its pilots to shine through.

While the Spitfire does have that je-ne-sais-quoi, I have hopefully demonstrated that the reasons for it being remembered so fondly are wholly justified. It was a superb looking, high performance aircraft that was also incredibly successful.

Of those 60 aircraft, fewer still have seen combat – managing to only have survived to the present day by virtue of the fact that they never saw serious action.

For this reason, it is more important than ever that these legendary aircraft are recovered, and authentically restored. These will provide a visceral reminder for future generations to appreciate the history, along with the determination and sacrifice that others selflessly made on their behalf.

Through its constant improvements, the Spitfire pushed the technology and capabilities of the piston engine aircraft to almost perfection. It would take the advent of the jet age to relegate the fighter.

But even then, it still found purpose and remained in use long after its contemporaries had disappeared. The Spitfire last flew operationally with the RAF in 1954, but continued to be used by air-forces around the world into the 1960s.

The Pilots of the Few Watch

Having spent almost a year researching Spitfires and the pilots that flew them, my personal respect and admiration for the craft and the brave men and women who designed, built, maintained and flew them has grown exponentially.

I have been very fortunate, in that when the project began very little was known about the Spitfire we are creating The Few watch from. This has meant that I have often felt like an explorer opening an ancient Egyptian tomb for the first time; gathering information, details and accounts that had otherwise been forgotten since the war ended.

So far, I have discovered the stories of all the 11 pilots that operationally flew the aircraft and the history of the many and varied missions it undertook. There is gun camera footage, photographs and just recently I have also managed to make contact with family of the pilots.

This will all be revealed in due course, but what I hope you will appreciate that The Few will not only have a physical part of the Spitfire in it, but it will also carry within it the soul and the memories of everything the Spitfire and its pilots achieved.

We will look at some of the development of the Spitfire from the Battle of Britain, its action in Malta, and then we will take a look at the beating heart of the watch – the movement.