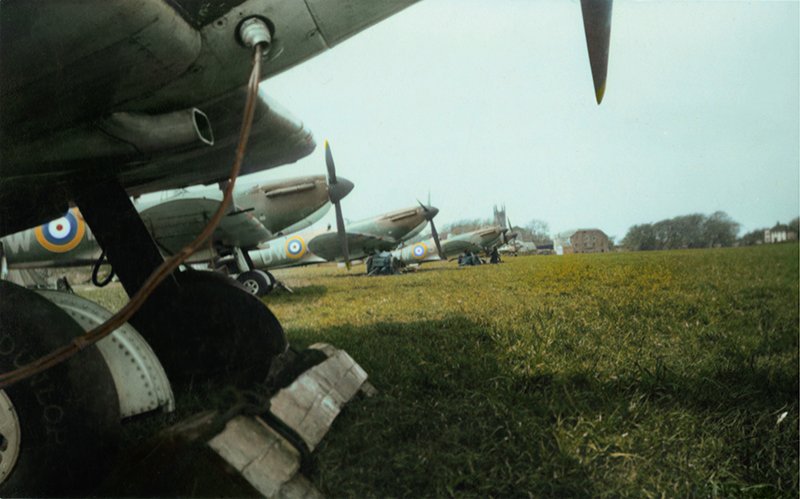 Sortie 6 – The Spitfire in War

In this Sortie we’re going to take a look at the Spitfire in combat, and the experiences that led up to its greatest challenge; the Battle of Britain.

If you missed the last Sortie, about the birth of the Spitfire, you can read that here.

My wife’s grandfather, Clifford Page, was an aircraft engineer with 610 Spitfire squadron, County of Chester.

During the Battle of Britain they were based in RAF Gravesend and RAF Biggin Hill. Their squadron are noted by the “DW” painted on the aircraft sides.

He was also a keen photographer and the images below, some I have had colourised, were all captured during this period. The captions are from his writing on the back of each photo.

After the Allies declared war on Germany on 3rd September 1939, Britain deployed their main expeditionary force in France. The few hundred Spitfires that were available were kept in reserve to protect the skies over Britain. Initially, around 260 Hurricanes were moved to France to help defend against the expected invasion.

The Spitfire in Combat

After the rapid fall of Poland, an extended period of inaction started – known as the “Phoney War”. It was not until 6 weeks after the war had started, on 16th October 1939, that the Spitfire was finally able to engage with the enemy.

From 602 and 603 squadrons, 6 Spitfires intercepted 9 Junkers Ju 88 – the Luftwaffe’s fast bomber – over Scotland. They were returning after having just bombed some cruisers in the Firth of Forth, killing 16 sailors. The Spitfire’s excellent speed meant they were able to catch and destroy two Ju 88 and heavily damage another.

The Spitfire’s prowess and deadly capabilities had now been proven.

Unfortunately, the Spitfire’s first success had been preceded by a tragedy. The first aircraft shot down by a Spitfire during the war was a Hurricane. Due to a mix up of communications just 3 days after war had been declared, a squadron of Spitfires and a separate squadron of Hurricanes were scrambled due to a possible sighting of enemy aircraft.

The sighting was wrong, and the pilots who were excitedly expecting their first contact with the Luftwaffe, instead engaged each other. In the ensuing fight two Hurricanes were shot down and one pilot killed.

The order to attack was allegedly given by Sailor Malan. Known for his aggressive tactics, he would later go on to become one of the RAF’s top aces with 27 kills. The Spitfire Pilot Officer who had killed the Hurricane pilot was John Freeborn, who himself would go on to be a top fighter ace with 11 confirmed kills and hold the record for the highest number of operational hours flown during the Battle of Britain. John later said that he thought about the tragic Hurricane pilot, P/O Montague Hulton-Harrop, every day – for the rest of his life.

The Hurricane pilot who had been shot down, but survived, Frank Rose, was later killed during the Battle of France.

The Battle of France

After a long wait, on 10th May 1940, the Germans launched their lightning assault into Western Europe.

At the start of the conflict, on paper at least, the Allies had the advantage. Not only were they defending home territory, but they had more (and arguably better) tanks, more fighter aircraft, considerably more artillery and roughly the same numbers of troops.

What they lacked was cohesion, communication, and the ability to take the initiative effectively. The Germans’ aggressive breakthroughs created confusion and disarray, and with effective support from aircraft – such as the Stuka dive-bomber – they were able to drive deep into the heartland of France.

Just five days after the Battle of France had started, as the Germans were still only starting to invade Belgium, French Premier Paul Reynaud told Winston Churchill in a telephone conversation “We have been defeated; we have lost the battle”.

With such defeatist voices within the French government and military gaining prominence, only 46 days after the battle started, the French surrendered.

During the Battle of France, the Allies deployed nearly 3,000 aircraft, including 10 squadrons of Hurricanes. However, this was only half the total number of planes (of all types) the Germans could muster. After the war, it was revealed that the French had kept an additional 4,300 combat aircraft uncommitted to the defence of their home, and instead held them in the South of France and North Africa.

Meanwhile, the RAF had lost over 400 fighter aircraft in the war so far, and hundreds of irreplaceable pilots – killed or captured.

As the Battle of France was still raging, the German assault had now swept up behind the Allied lines. The main British Expeditionary Force (BEF) contingent now found themselves cut off and under siege around Dunkirk in Belgium.

With Britain’s only professional army divisions now trapped, it was imperative that they be evacuated to safety, to ensure Britain was able to continue her resistance against Germany.

Operation Dynamo, which ran from 26th May to the 4th June 1940, was the mission to rescue and repatriate these soldiers. The alert went out that boats of all sizes were needed to carry soldiers across the English Channel. 860 Royal Navy, commercial and private craft answered the call.

Commander in Chief of the Luftwaffe, Herman Goring, had asked Hitler’s permission for his Luftwaffe to be used to destroy the remaining British enclave.

The Germans launched a ferocious assault with over 4,000 sorties against the beaches and the “little boats” in the Channel. The RAF responded with over 2,700 missions of their own, with Spitfires playing a pivotal role in reducing the number of losses due to the constant German strafing and bombing.

Over the Channel, where the fighting was the heaviest, 240 of the boats that set out to rescue the trapped men on the beaches were destroyed. However, the RAF would help match that number, with 240 Luftwaffe aircraft destroyed, with a loss of 106 Hurricanes and Spitfires during the operation, along with 60 pilots.

Some of those soldiers on landing back in England, who had not seen Fighter-command’s struggle over the Channel, were heard to “boo” men in RAF uniform – believing they had been abandoned by their air force while trapped on the beaches.

The eventual evacuation tally was 330,000 men rescued, which was almost ten times the initial estimate at the beginning of the operation.

The Dunkirk Spirit – defiance in the face of adversity – would soon be needed again.

With each loss and tragedy, the RAF command and pilots would constantly reflect on what had gone wrong, and what could be improved.

Fighters were now fitted with an upgraded identification friend or foe system, to avoid friendly fire incidents; noticeable as a long aerial fixed behind the cockpit with a wire running to the tail. Extra armour had been fitted around the pilot, and a fire-resistant covering placed over the fuel tanks. Guns had been harmonised to meet a target 250, rather than 400 yards in front of the fighter. The rear-view mirror had been made larger and adjustable.

The propeller was also upgraded, and with supplies coming in from the USA, a small tank of 100 octane fuel allowed pilots to activate an emergency boost of power.

But general tactics, including the close V formation flying, remained outdated and unchanged. It was the experience of the upcoming summer months and the strategy of pilots; including Sailor Malan mentioned earlier, that would allow pilots to realise the full capabilities of the Spitfire.

After the fall of France, Britain now stood alone against the Axis powers. The BEF, although rescued, was a spent force, having left almost all their equipment in Dunkirk. Success seemed impossible and invasion seemed imminent, but still the British would not surrender.

Hitler reasoned that once their precious air force was smashed, the British people’s will to resist would surely falter. The Germans believed that the RAF had just a few hundred fighters planes remaining. What could these “few” do against the might of the world’s most powerful air force?

If you are interested in owning one of these watches, I have opened up a reserve list. The initial waiting list is already full; the invitation was sent in August to those that subscribe to the newsletter, and the initial batch of watches were all reserved within 10 minutes! Once the watch is available for pre-sale, then those on the waiting list will have the first preview and will be able to place an order for one of “The Few”. Then I will contact those on the reserve list. The watches will all be strictly offered on a first-come-first-served basis. The number of watches that I will be able to make will be very limited. This is due to both the time involved in making each one; and also the diminishing availability of original material from the Spitfire. Please email me at [email protected] to register your interest.

Next Sortie… We’ll take a look at the Battle of Britain and the pivotal role the Spitfire played. We’ll see how their tactics changed, and how they rose to the threat of the feared Messerschmitt BF109E. See you there!