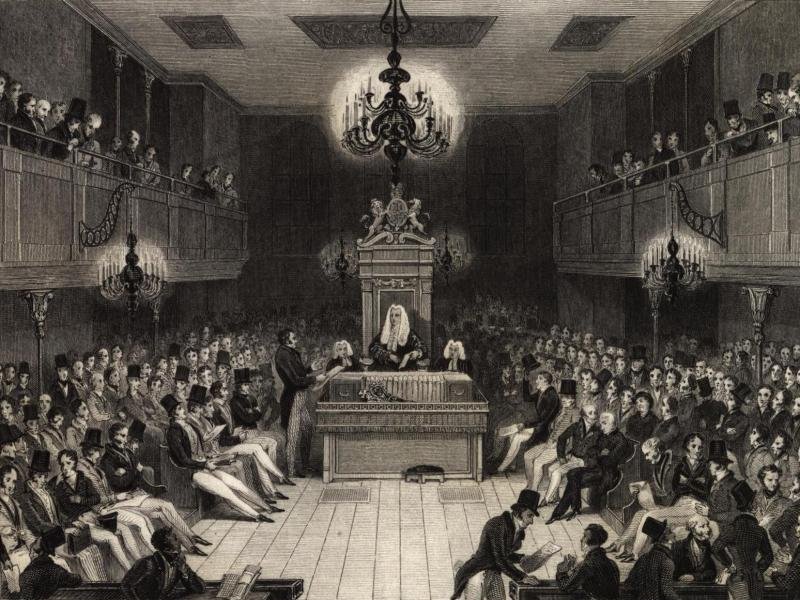 These are from the direct notes taken from the House of Commons debate in 1843. It’s quite long-winded, but really worth a read, as it puts into perfect perspective people’s attitudes at the time. Considering it was 170 years ago most of the attitudes are surprisingly contemporary.

thought the House ought to be very careful, lest, by the course proposed, they should break through the common course pursued by Parliament. If they wanted no special privilege, no bill was required. He was not one who looked with unqualified admiration at the present law of partnership in this country. That law ought to operate equally and fairly upon all parties. The general principle which ought to be adopted was not to give any exclusive or particular advantages to any party conducting any ordinary branch of trade, unless that branch could not otherwise be conducted. It was not any important improvement in machinery which should call for that exclusive privilege. Suppose an important improvement should be made in machinery, and they were asked to give an exclusive privilege to the cotton trade or the silk trade, would they not scout the proposal? Would they not say that there was intelligence and capital enough in the country to carry out the improvement without giving any special advantage to a certain party or a certain trade? He had great doubts as to the propriety of referring this bill to a select committee. It would be going from an established rule, and if they did so in this case they would be unable to refuse doing so in any other. He should therefore oppose the second reading of the bill.

had heard with surprise and deep regret, the speech of the right hon. Gentleman the Vice-president of the Board of Trade. It had involved the right hon. Gentleman in the charge of inconsistency of conduct. Could the right hon. Gentleman ever in future vote against going into committee to inquire into the operation of the Corn-laws? Could he refuse to inquire into the effect that law had on the manufacturers of this country? Although so meagre, shabby, and paltry, a case had been made out, yet the right hon. Gentleman said it was a case of investigation before a committee. Why the right hon. Gentleman had forgotten his own principles. It was only during the present Session that the right hon. Gentleman had said that it would be impolitic to make any change in the corn-laws, after so recent a change. Why the right hon. Gentleman dealt with, the watchmakers last year. There had been a reduction in the protection to the watchmakers of 15 per cent. The watch makers did not complain of this, on the contrary, they approved it. They said, “let the right hon. Gentleman do us justice with respect to food, and we will not ask for one farthing of protection.” Look to the nature of the bill. It was set forth that 40,000l. would be required to carry oat the objects of the company. It was a mere bagatelle. The money market was glutted with capital, and money could be got for 2 per cent. A banker, a Member of that House, told him that he would discount good bills at 1½ per cent. And what was the statement put forward? Why, that there would be a profit on the speculation equal to 90 per cent. No person could believe that this was a sound, valid, just, and judicious proposition, or one that ought to be sanctioned by the House. They staled it to be impossible to make watches without manufactories, and that it would require great capital. The hon. Member for Sheffield said he had seen the thing with his own eyes. It would be rather curious if he had seen it with another person’s eyes. But he said the thing was clear, that it was demonstrated, that it was done. Then, if watches had been made without machinery, and without all this capital, why not proceed in the same way? What was the necessity of coming to Parliament, for, according to their own showing, machinery and capital were not necessary for the purpose? The object of the company was to grant licenses to others to carry on the trade; but how were others to get the ponderous machinery that was required? If their statement was true, they had no case before the House; if false, how could they trust them at all? Reference had been made to the Aerial Transit Company. He hoped the parties making this proposition would be the first to make an experiment in that invention—and make a trip to the moon, for such persons were not wanted here. Considering how trade would be disturbed if the bill passed, he hoped and trusted that the energy of the House would be brought to bear on the question, and that it would decide honestly and justly between those parties.

said, that he had heard the statement of the right hon. Gentleman the Vice-President of the Board of Trade, with the deepest regret, and if her Majesty’s Government sustained the doctrine he had laid down, it would strike terror and dismay into all the manufacturers of the kingdom. His principle was, that every schemer who came forward with a new invention was to have a joint-stock company to carry out their schemes, in opposition to the law which guided the commerce and manufactures of this country.How different was the conduct of the right hon. Gentleman in reference to free-trade? The right hon. Gentleman was entirely inconsistent. How differently Mr. Poulett Thomson acted when he was connected with the Board of Trade. A bill had been brought in to establish a company for the sale of medicines, on the ground—and a clear case was made out—that the medicines sold in the shops were impure; but Mr. P. Thomson said, on that occasion, that it was the policy and principle of the trade and commerce of the country not to establish monopolies which would be destructive of a large trade already existing in this country. This company said they wanted 40,000l. By the law of patents, twelve persons were joined together to carry out their objects. Did the right hon. Gentleman mean to say that twelve gentlemen connected with the watch trade were not capable of appreciating the merits of the invention, and of giving 40,000l. to promote it? He knew that they could advance a million of money if it were necessary; but he knew that the whole scheme was a perfect delusion, and it could only be successful by having a bill passed through that House, and annihilating the watchmaking trade of this country, and by throwing out of employment tens of thousands of industrious persons, and by depriving them of subsistence to carry out the plan of a Swiss adventurer. The whole of the trade was in confusion and uncertainty in consequence of the agitation of this bill. The hon. Member for Sheffield had said, that the effect of the measure would be to give employment to all the watchmakers of England who were now unemployed. There never was a greater fallacy than this. He could hardly believe that the hon. Member for Sheffield was in earnest when he said it. The scheme was tried in Paris seven years ago and failed, and now this Swiss came over here in the hope that he would be more successful in imposing the delusion upon the people of this country.

said, he would give his support to the motion, because he was confident that it would be found upon examination, that there was in reality no invention peculiar to the promoter of this bill; but that the whole machinery had been for centuries in use upon both sides of Mount Jura. Some years ago, an inquiry was made in Paris into the causes of the depression of the watchmaking trade in that city, and it was then found that the real cause was the superior accuracy and cheapness with which all the parts of a watch could be made by means of the machinery in use in Switzerland, and which he believed to be the very same as that proposed to be protected by the bill. He was surprised to hear the hon. Member for Coventry speak contemptuously of the inventor, because he was a Swiss. Did not the hon. Member know, that it was to Frenchmen and Swiss this country owed the introduction of the silk trade?—and it was to the enterprise of those foreigners we owed the foundation of the manufacturing prosperity of this country.

said, that his attention was turned to this subject because the town which he had the honour to represent was one of the three principally engaged in the watchmaking trade. He would not object to a commission of scientific men to inquire into the merits of the supposed invention, and the expediency of the bill, but he should oppose the present motion.

hoped the House would allow an old manufactures to any a few words. He would only ask how could the House judge of the merits of an invention, or pretended invention, when there was no specification? He should oppose the bill.

said, that as this was a question of some importance, be wished to say a few words. He admired the straightforward and candid course taken by the right hon. Gentleman the Vice-President of the Board of Trade, and he was determined to give the bill his support. The Company only sought a fair protection from the House, and no monopoly or restrictive privilege whatsoever. On this subject a patent already existed, and all they sought was that the patent should be transferred to a larger number of persons.

in reply, said, that even if the Some refused to accede to the motion, the invention would not fall to the ground, for that, as the machinery had been completed, others would be found to perfect the invention.

The House divided on the question that the word “now” stand part of the question;——Ayes 77; Noes 154; Majority 77.

Bill put off for six months.