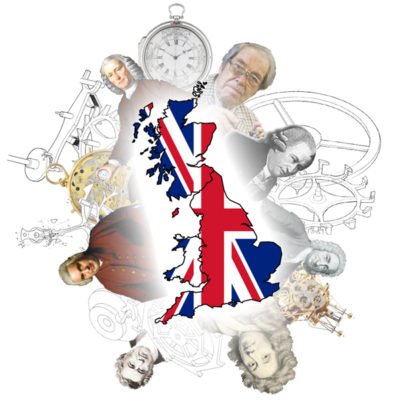 Watchmaking is a British trade. This is evidenced by the fact that every major escapement design, and around three-quarters of the remaining innovations came from the UK. As a result there are now a number of emerging British watch companies and brands looking to revitalise that legacy.

Below is a list of British watch brands. Some of these UK watch companies sell what can be considered some of the best luxury watches in the world, handmade by the top British watchmakers such as R W Smith. Others design their watches in the UK, but use quality Swiss made-movements and German-made cases; such as Schofield.

It’s not only big watch brands that are building their own watches; you can read about how I hand-made my own British watch here. I am also in the process of building a watch using parts from the iconic Spitfire.

British watchmaking can be said to have started with Thomas Tompion (1639-1713), often referred to as the father of English clockmaking. A student of Tompion, George Graham(1673-1751), made further innovations before passing the baton to one of his own students, Thomas Mudge (1715-1794), who invented the lever escapement; which is still the most widely used escapement in today’s watches.

John Harrison (1693-1776) solved the problem of finding your longitude at sea which was considered one of the greatest feats of the age. Enabling British ships to travel accurately and more safely around the globe was one of the major contributing factors to the growth of the British Empire. Following in their footsteps came other great watchmakers such as John Arnold and Thomas Earnshaw.

The Decline of British Watch Manufacturing

In 1800 Britain made around half of the world’s watches; around 200,000 pieces a year. By 1900 the quantity produced in Britain had declined by half, despite the worldwide market for watches having risen into the millions.

The problem lay in the hand-made nature of English watches and the heavy reliance on skilled workers who were reluctant to adapt to the changes in technology. The Swiss and the Americans were much quicker and more successful in adopting mass production techniques. Mass manufactured watches were soon able to compete directly with hand-made ones, and eventually surpass them in performance despite only costing a fraction of the price. As a result the watchmaking industry in Britain collapsed.

There was a brief resurgence in post war Britain, however the remaining businesses were not robust enough to survive the biggest crisis in watchmaking – the emergence of the quartz watch.

The Rebirth of the British Watch Industry

Recently there has been much talk of a revitalization of the British watchmaking industry, and while it is true that the situation is more hopeful than 10 years previously, there still remains a lack of a British watch company mass-producing any watches that are 100% made in Britain. For the most part the British brands that currently exist are small-scale and often overpriced when compared to more established Swiss brands.

Recently Robert Loomes has started to create watches made with older English Smiths movements (which were 100% made in Britain during the 1950s-1970s), and has demonstrated that there are facilities and talent still remaining in Britain to make all the parts of a watch here.

The Future of British Watch Brands

All we need now is the will and, more importantly, the investment to make British watchmaking for the mass market a reality. Only then can we see “Made in Great Britain” reclaim its rightful crown as the mark of excellence in horology.

Since the passing of George Daniels in 2011, Roger Smith has taken over the helm as Britain’s foremost watchmaker. In his small workshop on the Isle of Man he, and his team of around 6 people, produce hand-made pieces in the traditional English style.

Proudly promoting the UK as the world’s historic centre of watchmaking, and working towards seeing “Made in Great Britain” reclaim its crown as a mark of excellence in horology.

Following the successful completion of his own watch, handcrafted over 7 years, Colin has recently started creating watches for the public. Since completing his classical watchmaker training at both the BHI and WOSTEP, Colin has gone on to win 5 awards, created the largest watchmaker apprenticeship in the UK and been made a Fellow of the BHI (British Horological Institute).

After having made a number of bespoke watches for customers who appreciate traditional British craftsmanship, he is currently working on creating an historic collection of watches built from a WW2 Spitfire.

At this British watch company, Robert Loomes is an experienced repairer and restorer of clocks and watches who makes his own watches and is very passionate about having them be 100% British using locally sourced materials. Most of the work on each watch is undertaken in their workshop in Stamford, including dial and case manufacture, with any outside help coming from local craftsmen. At least 35 British workers are involved in the production of each watch.

anOrdain, named after a small loch near Inverness, are a rapidly growing Scottish watch brand that have built their success around their handmade enamelled dials. Their two models of watch have a range of choices of brightly coloured dials; each having been handmade and fired in their own process they have developed over 5 years.

Each Wessex Watch comes with a hand-made engraved dial made using their own unique engraving method. They offer customers the choice of a range of complex guilloche patterns, or even the opportunity to design and order their own. Every watch uses a high-grade Swiss movement and is also fitted with a hand-made strap.

Schofield produce a selection of thoughtfully designed watches. They aim to create as much of the watch as possible within the UK, or else use high quality imports.

The two brothers, Nick and Giles English, are the founders of this company named after a French farmer they befriended. After releasing their first watch in 2007, the company has grown to be the largest watch company in the UK. Most Bremont watches are assembled in the UK with parts made overseas, with some of their high-end pieces including British-made parts.

Garrick are growing Norfolk based UK watch brand employing some really talented British watchmakers. Their watches are currently available in over 6 models, including some with their own in-house movement.

CWC (Cabot Watch Company) are suppliers of watches to the British Armed Forces, and so are sometimes called the British Army Watch. Because of this they all have military straps, robust cases and easy to read dials. A lot of their quartz watches also have a battery hatch to allow soldiers to change the batteries themselves. Their entire range is Swiss made and assembled with ETA movements and very reasonably priced.

Re-founded in 1996 by the great-great-great Grandson of the original Fears Watches founder, this company makes a range of classically designed watches. Their current models are assembled in the UK with parts made overseas, with the exception of their top model which is made by Garrick in Norwich.

Formed in 2013, PINION makes a small range of automatic and hand-wound watches, plus specialises in the use of rare new-old-stock vintage movements in its limited edition pieces. All parts are built overseas and assembled in the UK.

Harold Pinchbeck currently have a range of 8 styles of watch for sale, since their company launch in 2008. All their watches are assembled in England and come with tastefully designed accessories made in the UK.  Their watches all use Swiss ETA movements, with their most expensive range having dials made in the UK.

Each of these British brands produce very low cost watches, mostly made in China, for the mass market.

Both are originally from Britain, but now work and live in Western Switzerland.

There are a number of companies that make claims to a British foundation and heritage. However none of these company are directly connected with Britain or with the famous watchmakers or their original businesses which they are named after.

Graham 1695 – Founded in 1995, this independent Swiss company produces high end watches with a racing or aviation theme. Although there are no direct links, they are named after the famous English clock and watchmaker George Graham (1673 – 1751). The 1695 date is in reference to the first signed piece by George Graham

Arnold & Sons – As with Graham, they were founded in 1995, not in 1764 as is claimed. As a result they have no heritage or connection with John Arnold (1736-99) the famous English chronometer maker or his sons who they are named after. It is now owned by Citizen.

Thomas Earnshaw – a Hong Kong/Chinese brand that is often sold on shopping channels. The quality of their watches is reflected in the price.