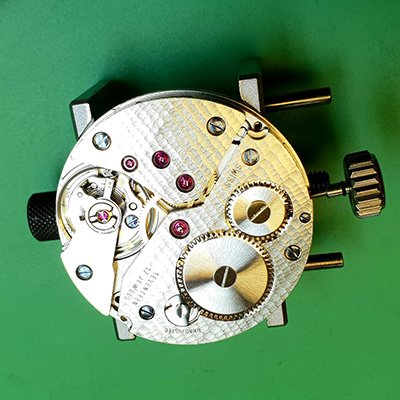 Designing and Making My Own British Watch

Since I started on my watchmaking journey, it has been my grand ambition to design and hand-make my own British watch.

One of the first books I purchased after my interest had been piqued was George Daniels’ Watchmaking. This is a fairly exhaustive description of how to make every part of a watch by hand. I read it cover to cover 3 times in a month after it arrived, and despite at the time it being difficult to understand the instructions; it did not temper my enthusiasm to put into practice these ancient skills he had rediscovered.

When people think of watchmaking, their first thoughts often turn to Switzerland, so I was hugely motivated by discovering that despite all the marketing hype, the technology behind the modern watch is almost entirely British. The British watchmaking technologies, tools and techniques from the 18th, 19th and 20th centuries are still in use today.

Unfortunately the British watch industry is currently a shell of its former glory. If I wanted a British watch of my own then I had only one practical option – to make it myself.

So there was my goal; to build my own watch, hand-making as much of it as I could, making it a truly British watch.

In the end I can say that my watch is currently one third hand-made from scratch, one third customised and one third unaltered.

It is based on a stock ETA 6498 movement but set out like a regulator, with the hour hand at the top and the second hand at the bottom. The 6498 is a large pocket watch sized movement, it is manual wind and has the second hand off centre at the 6 o’clock position. So to convert it to a regulator layout I moved the hour hand to the new position at 12.


Designing My Own British Watch

I started out with grand plans to make a more complex watch with retrograde hour and minute hands and to work towards making every part of the watch by hand. Retrograde is where the hands move along an arc and then snap back to the beginning when they reach the end of the arc. You can read about the progress of my designs here.

I designed a layout of how I could achieve that working with the ETA 6498 movement. I realised that I would need an extra plate over the top of the additional wheels to hold them in place. The retrograde complication is adapted from a drawing in George Daniels’ book Watchmaking.

However, my ambition was tempered by the realisation of the time required. In the end I reduced the complexity of the watch to achieve the main goal – producing my first branded watch.

Making My Own British Watch

The lathe I used for most of the work in making my watch (above). It was a Chinese-made Sincere brand lathe. It had most of the additions that I needed such as; a milling attachment, dividing head, cross slides and a mandrel.

I started by making the crown wheel, ratchet wheel and click; as well as making the screws for them.

These three elements alone had taken me close to 100 hours to design, set up, manufacture and finish. The finishing was particularly time consuming as I had set myself high standards; I went for a flat surface and high polish on the screws and click, and for the crown and ratchet wheels a sunburst effect with beveled and polished teeth.

As I was working full-time I had to find the time in the evenings and weekends to work on my watch. So I refined my ambition by deciding to not make the train wheels. Also rather than make each of the movement screws from scratch, I instead tempered the existing screws to a blue colour.

I had hand-made my wedding rings around this time and learned how to achieve a satisfying hammered finish. So I applied this to my barrel and train bridges as well as the balance cock.

The next step was to adjust the position of the hour hand; from the centre up towards the 12 o’clock position. This could be achieved by adding in another hour wheel and an intermediate wheel; to ensure the hand turned in the correct direction. As the minute hand would now not sit on the same axis as the hour hand, for the adjusted hour wheel I drilled out the existing hollow post and replaced it with a solid post. The brass intermediate wheel I made by hand using a dividing head and wheel cutters.

To position the new hour and intermediate wheels I milled out two donut shapes on the existing main plate. This created the recess for the wheels to sit in and posts for the wheel to rotate on (below).

The plate which held these wheels on was a solid disc with the corresponding holes drilled in for the hands, the dial feet and the 3 screws I would use to secure the plate to the main plate of the watch (below). I also added in an observation hole for the keyless work. As I had created additional thickness from the new wheels I ensured that there was enough clearance by milling a space for them on the reverse side. I then finished off the plate by decorating it with Genève stripes. This was achieved by running a milling drill bit at a very slight off-vertical angle across the surface. With the cross-slides from my lathe this was a quick process once it was set up.

The winding stem was made from a piece of blue steel and cut with a tungsten graver on a hand powered lathe and turned between centres. I was fortunate in that I had made around a dozen stems for this calibre during my training at the British School of Watchmaking (BSoW) for the 6498 movement. You can learn how to make a winding stem here.

I had also made several balance staffs for the movement at the BSoW, although these were mostly practice pieces and so I did not feel would be sufficiently accurate to use in the watch and so I decided to make a new balance staff. You can learn how to make a balance staff here.

Making a balance staff is a very delicate and highly skilled process, and one that is viewed as the pinnacle of watchmaking; as you need to be accurate in parts to within 0.01mm along 16 measurements. If 15 measurements are correct but one is wrong, then you need to start again and so it is also a process in the art of fortitude and patience.

Once you are practiced each staff takes around 4-6 hours to make, and for this watch I made 6 in total and chose the one I was the most happy with.

Any errors in the balance staff will have a significant effect on the timing of the watch – making it gain or lose time. My staff performed excellently, with no beat error, positional error and, after additional fine tuning, a timing delta of zero.

The final part to make was the case. This was milled out into a rough shape and then finished off using a grinding wheel on a polishing lathe. It is a 3-part case with a snap-on bezel and a screwed down display caseback.

I had measured the case with some existing seals in mind and they fitted perfectly. With the separate parts all fitted together and sealed, the watch has passed a pressure test at 50M (5BAR), making it suitable for swimming.

I finished the case by giving the bezel a high polish and every other surface a grained finish; either straight or circular. It is fitted with a black 22mm alligator strap from Omega.

I have painted the hands red, white and blue in line with the Great British Watch Company branding.

With the final silver dial made and fitted, the watch really comes to life.

I have designed a dial that I intend to make myself (below). I would also want to remake the hands entirely.

Then internally I would remake the barrel and train bridges into a three quarter plate, which I would hand-engrave. I would also want to hand-engrave the front plate as well; I’ve always liked the idea of having something poignant hidden beneath the dial – that only the wearer is aware of.

Altogether the watch has taken around 500 hours of manufacturing to get to this stage. In addition to that there is at least 500 hours of researching, designing and thinking. Add on top of that another 500 hours of time setting equipment up.

After 7 years, I can say that overall I am very pleased with the result. It is very satisfying to have my very own British watch finished.

The experience has inspired me to continue on my personal journey within watchmaking. My career is flourishing and I am able to use my position both at work and online to help inspire some of tomorrow’s watchmakers to follow along the same path.