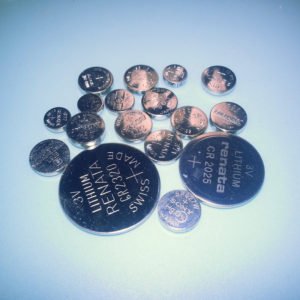 The vast majority of watches on the market and in everyday use are battery-powered quartz watches. The batteries are called either watch batteries or button cells, while the larger lithium powered batteries are sometimes called coin cells.

Despite many advantages of the quartz watch when compared to a solely mechanical timepiece, such as being; cheaper to produce, more robust and self-regulating amongst others, there is one downfall of the quartz watch. This is the reliance on chemical batteries to power them.

There are 3 main types of batteries in use in a watch:

Their common names are given in reference to one of the electrodes they use. In the case of the Silver Oxide and Mercury batteries, it is the positive electrode, whereas a Lithium battery is named after its negative electrode.

Mercury batteries have not been manufactured since the 1990s due to health and environmental concerns with the use of mercury. 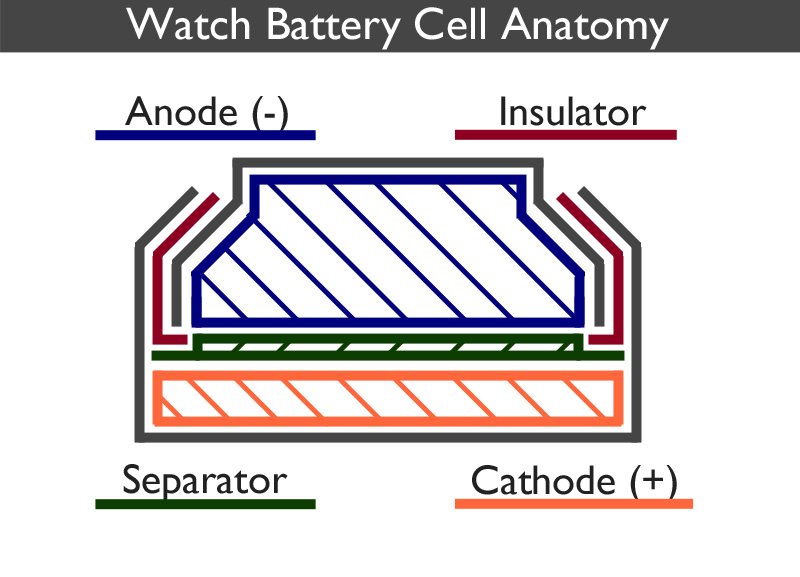 The watch battery is split into two distinct parts, the anode can (negative) and the cathode can (positive). The anode is a gel containing a mixture of  the negative electrode and the electrolyte. The cathode contains the positive electrode. Each part is surrounded by a metal shell, coloured grey in the above image, which forms the outside of the cell as well as acting as the corresponding positive and negative contact points.

A separator, which is usually a mesh, prevents the electrodes from mixing but allows ions to flow between each half of the cell.

Although the electrodes do not touch one another, they are electrically connected by the electrolyte.

The insulator ensures that the two parts of the casing are held in place and do not touch one another. It also acts as a seal preventing the chemical mixtures from escaping. It is usually made from nylon. Sometimes it is referred to as the gasket.

In simple terms; in a Silver Oxide battery the electrolyte causes the Silver to lose its oxidisation. The electrolyte then passes the oxidisation onto the Zinc. So you start with Silver Oxide and Zinc, and you end with Silver and Zinc Oxide. In the process an electron is released which is the electric charge that we can use. In the below formula Ag is Silver, and Zn is Zinc.

Watch batteries are Dry Cells, which means that the chemicals used are not free-flowing liquids. They are usually used in the form of a paste, with only enough moisture to allow a current to flow.

In the chart below are the main characteristics of each battery type:

The Code is the universal name referred to in the battery naming syntax. This is explained more below.

The Electrolyte used in Mercury and Silver Oxide watch batteries is the highly alkaline Sodium Hydroxide.

In Lithium batteries there is slightly more complex chemistry, and so the Electrolyte used is a mixture of Lithium Perchlorate, Propylene Carbonate and Dimethoxyethane.

Nominal Voltage is the average output of the battery over its useful working life.

End Voltage is the lowest amount of voltage the cell will produce before failing.

The Shelf Life is caused by the side reactions that naturally occur even when no load is applied to the battery. These reactions do not produce current and account for a 5 to 20 percent loss of the cell’s original charge per year.

You will see from the graph below that watch batteries all share the common characteristic of having a stable voltage throughout their life, which then drops very rapidly once the End Voltage is reached and the Shelf Life expires. 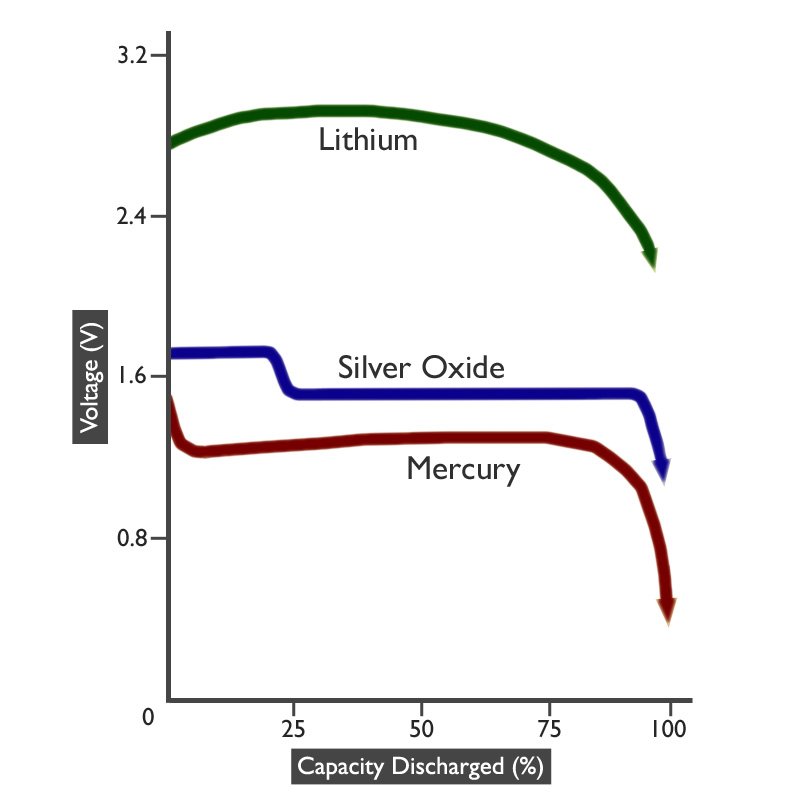 A battery’s capacity is measured in milliamp-hours (mAh). So a battery with a capacity of 10mAh, will last 1 hour if you draw 10 milliamps from it. A basic quartz watch will usually draw around 1/1,000,000th of an amp per hour or 1 microamp (µA).

So we can calculate that a watch with a consumption of 1µA per hour, and a battery with a capacity of 20mAh will work for:

This is roughly 26.4 months. We must multiply the mAh by 1000 because a milliamp is 1000 times greater than a microamp.

Generally speaking the larger the battery, the higher its capacity. Using the Silver Oxide batteries that Renata manufacture as examples, where the diameter of the cell in all cases is 7.9mm;

Watch batteries have a universal naming syntax. They are used by all major watch brands, however some companies, most notably Renata, also use their own naming system. This is mentioned in more detail below.

The naming syntax is a string of letters and numbers which tell us the type and size of the battery cell.

After the code for the type of battery we usually have an R, this just means that the battery cell is Round in shape.

We then have two numbers which tell us the Diameter and the Height of the cell. The Height is always given as the exact amount, although the value does not include a decimal point. For example a height value given as 3 is 3mm, and a height value of 33 is 3.3mm.

The Diameter value given is not always the exact Diameter in millimeters, but is a universal number code. From the chart below we can see that the Code 5 means a diameter of 5.8mm. There is some slight tolerance in the allowed size, however no battery is manufactured outside this. For example you cannot buy a battery that has a diameter of 6.2mm, but you could find one that is 5.9mm. 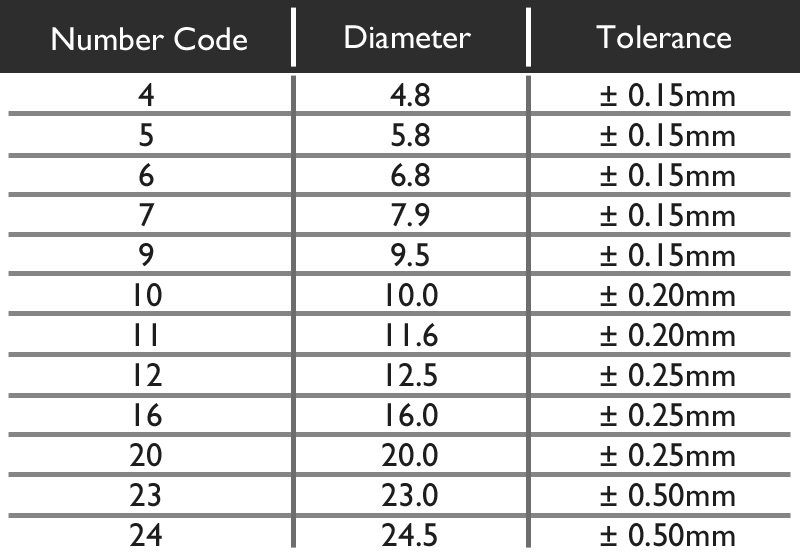 The following letters may appear after the size code to indicate the electrolyte used:

At the end of the code you may also find a W, which is an indicator that the battery complies with all the requirements of the international IEC 60086-3 standard for watch batteries.

A Low Drain battery has a high internal resistance, which means that the available current is limited. They use sodium hydroxide as the electrolyte. This makes the Low Drain batteries very stable, but means that they cannot be used if a high current or pulse is required, such as if a light is used on the watch or an alarm sounds.

High Drain batteries have a lower internal resistance, and so can be used in watches with secondary functions that require a pulse of high current. They use potassium hydroxide as the electrolyte.

High Drain batteries have a higher rate of self discharge however, and are very likely to leak once their capacity has been discharged.

All Silver Oxide batteries have a chance of leaking and damaging the watch movement. This usually occurs when the battery cell has discharged and some of the highly alkaline electrolyte comes into contact with the Zinc electrode. In such cases electrolysis occurs and Hydrogen gas is produced. The gas can build up and escape from the cell through the insulator, damaging it in the process. Once the seal has been broken the corrosive chemicals inside the battery cell can then escape and cause damage.

Mercury has been used in the past as an inhibitor, to reduce the risk of leakage. The Mercury content was usually around 0.2% of the total composition of the battery, but this practice has largely been discontinued due to environmental concerns with the use of Mercury, and advancements in the construction of the battery cell which make leaks less likely.

You can learn more about watch battery leaks and how to fix them in this article.

Because they use Silver, Silver Oxide batteries are generally considered to be expensive.

Lithium batteries are generally used in watches that require frequent high pulses of current for secondary functions. Due to their size the capacity is generally much higher than a Silver Oxide battery, the above cell for example has a capacity of 150mAh.

As they can deliver a constant high current, if the watch movement becomes short circuited, the Lithium battery will drain very quickly.

Due to chemical composition used, there is virtually no risk of Lithium batteries leaking. However Lithium itself is highly combustible, and so if the watch is exposed to extreme heat there is a chance of the battery cell exploding.

When compared to Silver Oxide batteries, as cheaper elements are used, the Lithium coin cells are generally considered to be inexpensive.

Renata produce a significant proportion of the watch batteries in use, and they have their own numbering system for Silver Oxide batteries which they use alongside the Universal naming syntax. Because of the high volume of batteries they supply, this numbering system is sometimes referred to as the “Swiss” battery number.

The Universal naming syntax, although used internationally is sometimes referred to as the “Japanese” battery number. This is because Maxell, Panasonic, Sony and Toshiba all use the Universal system exclusively, and prominently print the code on their batteries.

Watch battery cells contain a lot of chemicals that are harmful to the environment. Most batteries, even ones that have leaked, can be recycled. Silver Oxide batteries in particular are valuable, and in sufficient quantities can be sold for scrap to an appropriate recycling company.