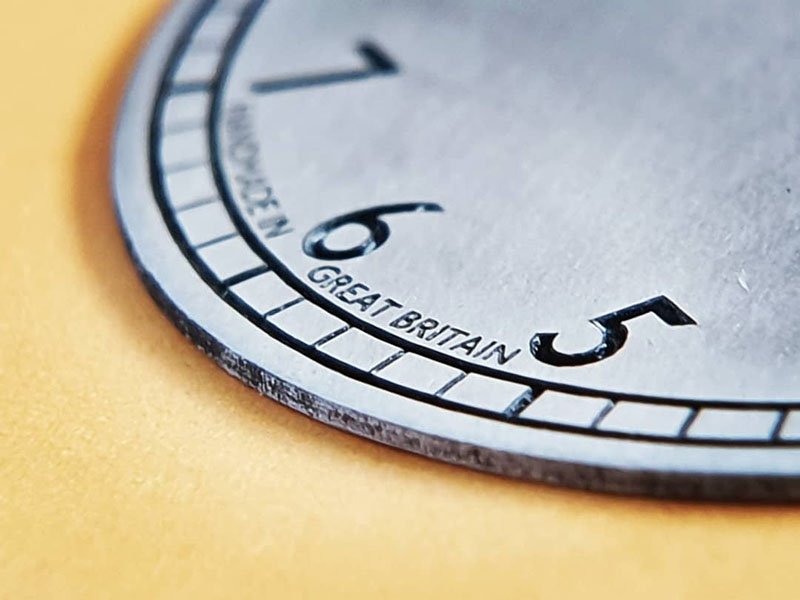 Sortie 4 – Made in Great Britain

In this Sortie, we’re going to speak a little about the manufacturing of a watch and the challenge of making a watch that is genuinely “Made in Great Britain”. Then we’ll look at a fascinating story of how a wrist watch saved someone’s life.

If you missed the last Sortie, where we look at the Spitfire Pilot, you can see that here.

During the Second World War British watch companies changed their production away from timepieces to help the war effort. The armed forces relied instead on Switzerland to produce their watches. Among them was a list of 12 companies – now known as the Dirty Dozen – that were used by the Allies.

After the war watch production in the UK resumed, notably led by the brand Smiths. However the emergence of the quartz watch in the 1970s meant that the demand for mechanical watches plummeted. Soon all major production facilities in the UK were closed.

Switzerland was the only country that was able to hold on to its watch manufacturing industry. Since the re-emergence of the mechanical watch as a luxury item, the Swiss have built their reputation as the world centre of watchmaking.

The “Made in Switzerland” or “Swiss Made” brand is very heavily regulated. However, currently for a business to place the Swiss Made mark on their watches they need to do just two things in Switzerland as a minimum:

100% of the watch parts can be made in China. They can then be shipped to Switzerland where there’s a final quality control check and the watch is put together; potentially by a worker who has been brought over from the same Chinese factory.

There is also a stipulation that 60% of the manufacturing value needs to be added in Switzerland. This can be easily circumvented by the high wages in Switzerland involved in inspecting and finishing a watch and the very low costs of manufacture in China.

Nowadays, in an effort to reduce costs most Swiss brands, including prestige marques, have factories in China. There are of course exceptions and some brands do manufacture their watches completely in Switzerland, however the “Swiss Made” mark does not distinguish this difference.

China (together with Hong Kong) directly produces close to 95% of all the watches in the world. Combined with those they also produce indirectly, such as the above example, you can see that only a small fraction of watches are not, either partially or completely, manufactured in China.

I previously lived in China for 8 years running my own business and am fluent in Mandarin – on many days it was the only language I spoke. So it would appear to be a perfect match that if I wanted to make a watch, then China would be my first choice.

On a tour of the Great Wall, not long after I had first arrived in China

It is certainly tempting. I am already aware of all the benefits and pitfalls of doing business in China, I can speak their language and negotiate the best terms. I am also aware that many consumers would be unable to tell the difference between places of manufacture; allowing me to maximise my potential return.

However my motivation since training to become a watchmaker has always been to make my watches in Britain. Hopefully playing a small role in the revival of the industry here too. This is certainly not the easy option, but it is what I aspire to. Having already handmade my own personal watch in Britain, I know that it is possible.

Despite the rich history of watchmaking in Britain, the UK currently does not have a significant watch industry. The UK purchases 6.3% of all luxury watches each year. However global sales from British watch brands are currently less than 0.3% of the total watch market; and that market share isn’t growing.

I am unusual in being a watchmaker who has started a watch company. Most current British watch brands were started by either designers or investors, often with experience in vastly different industries. With their primary focus on either style or a return on their investment, the challenge of manufacturing their watches in Britain is therefore not their top priority.

With less regulation than Switzerland, the “Made in Britain” mark is often used as a marketing tool rather than a true statement of the origin of a watch.

In watchmaking, although the market is small, Britain still occupies a position at the very peak of the industry. George Daniels, from London, was arguably the greatest watchmaker of the 20th Century, and his apprentice Roger Smith, from Bolton, is regarded by many as currently the world’s best watchmaker.

Made in Great Britain

Ultimately, for a watch to tell the time it doesn’t matter where it is manufactured. China produces some of the world’s most accurately engineered items, and if you are wanting to buy a quality watch then the “Swiss Made” mark is still one of the best indicators to look for.

However for me to feel like I am truly paying homage to the 100% made-in-Britain Spitfire, designed by R.J. Mitchell, built in Castle Bromwich and fitted with a Rolls Royce Merlin engine, then to reconnect with that same spirit I need to manufacture everything I can within Britain.

The Few’s standard movement will come from Switzerland, given the challenge and cost of creating a movement in Britain by hand (my personal watch took me 7 years to finish). But everything else – even the watch straps and the packaging – will be manufactured in Britain. We will look in a later Sortie about the details of the movement, as well as the bespoke option to have a British-made movement fitted.

A watch that saved a life

I’ll finish off this Sortie with an incredible story.

I had hoped to be able to share with you a tale of a Spitfire pilot using their watch, much like in the film Dunkirk, where the pilot uses his watch to keep track of his remaining fuel.

We know that the wristwatch was used by Spitfire pilots as an integral tool when flying and navigating during WW2; however it appears to have been so commonplace that they rarely made comment of the fact.

As you’re coming along with me and your fellow Spitfire enthusiasts on this journey; if you know of a story about a pilot (from any era) relying upon their watches, please get in touch and let me know: [email protected]

So for the moment, in lieu of a story of a Spitfire pilot using their watch, we’ll take a look 20 years on from the war and learn about the amazing story of Gordon Cooper, “Gordo”, an early American astronaut. In 1963 he was piloting the Faith 7 spacecraft – the last flight of the Gemini programme, America’s first space missions. His objective was to fly into space on a rocket. The capsule on the tip would then detach and he would orbit the Earth 22 times before making a re-entry.

As he was performing one of his final orbits disaster struck.

His tiny capsule experienced total power failure, which meant that his electronic clock and gyroscopes also stopped working. The carbon dioxide inside the capsule started to reach dangerous levels. Without power operating the cooling system the temperature rose to 54C. The capsule was designed to be operated almost entirely automatically. His chances of returning to Earth safely were quickly diminishing.

He calmly switched the rudimentary controls to manual. Although the capsule’s clock had stopped he was fortunately wearing a mechanical wristwatch – allowing him to record the time. By looking out of the small window he was able to identify the star patterns, and from that, work out his rough position. The angle of the horizon through the window would tell him his attitude.

Using his watch for precise timing he was able to set his pitch correctly and start the re-entry. Managing to keep his position as he plummeted towards the ground, he again used his watch to time the next stage of the decent – firing his retrorockets. Fortunately everything went to plan. He landed in the pacific ocean just a couple of miles from his original landing spot. An incredible achievement having navigated using just his wristwatch and knowledge of the constellations.

A hot, but happy, Gordo shortly after his capsule had been recovered

As The Few will be worn by Spitfire enthusiasts and pilots alike, while I hope it will not be needed to save any lives, it has been designed to have the same functionality as the essential tool the original “The Few” used it for.

Next Sortie… We’ll take a look at the Spitfire, starting with the origins and R J Mitchell’s vision.