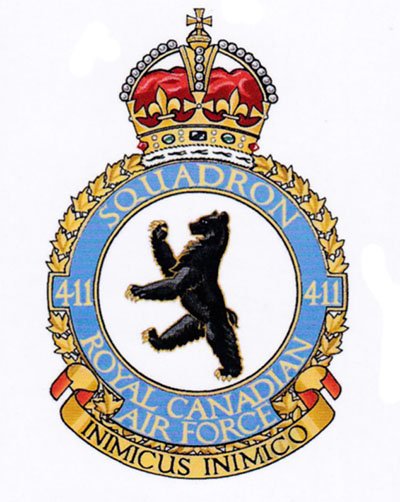 Following the introduction of Spitfire ML295 in the last Sortie, which is the historic aircraft that The Few watch will be made from, here I will introduce the squadron that these pilots flew with and will uncover some incredible new research about the squadron’s most successful pilot.

A squadron of Spitfires was generally made up of 12 aircraft, often split into an A and B flight of 6 aircraft each.

At any given time, a number of aircraft were either being repaired or serviced and so to keep 12 Spitfire airworthy, a squadron needed to have a number of surplus aircraft.

Although the exact numbers varied for throughout the war, in June 1944, when Spitfire ML295 was first posted to 411 Squadron, the totals for aircraft and personnel were:

The Auster was a light aircraft that would have been used to ferry personnel around. Prior to using the Auster, the squadron flew a de Havilland Tiger Moth for the same purpose, although the Tiger Moth appears to have often been used to take any visitors out on joy rides!

411 Squadron pilots taken in April 1945. Written alongside is perhaps their unofficial motto: “Keenness is not enough, we must press on regardless”, underneath they have given themselves the nickname “The All Metal Pursuit Squadron”

On 16th June 1941, in Digby Lincolnshire, a new Spitfire squadron was formed using existing professional pilots and those who had trained in Canada under the British Commonwealth Air Training Plan. They gave themselves the nickname of the Grizzly Bears after their Squadron emblem of one of Canada’s native bears. The pilots called themselves the Roaring Boys, which is likely due to an inside joke of them all roaring like lions whenever MGM’s lion roared during the opening credits of a film.

All of Spitfire ML295’s pilots were in the 411 Squadron. Their Spitfires can be identified by the 411 unit’s identification letters, DB, written on the sides of the aircraft. DB is followed by a letter from A-Z which denotes the specific Spitfire within the squadron. These letters are always unique to an aircraft at any given time, however they were reused when the Spitfire was replaced.

In this photo we have Hal Kramer, one of Spitfire ML295’s pilots, sitting in a 411 Squadron aircraft. The DB is clearly visible on the side of the Spitfire, although the identifying letter, which would have been painted after the red, white and blue roundel, is just out of the frame. This leaves open the possibility that the Spitfire is ML295

They chose their motto to be Inimicus Inimico “Hostile To An Enemy”, and they went on to live up to that name.

In total, the Grizzly Bear pilots logged 15,502 flight hours on operations, scored 84 confirmed aerial kills with 44 further aircraft damaged and 6 destroyed on the ground. In addition to this they also destroyed 367 motor transports and damaged a further 353, as well as destroyed 23 locomotives with a further 65 disabled.

This made the Roaring Boys one of the most successful squadrons of Spitfire pilots of the war.

The 411 Squadron disbanded in 21 March 1946. It then reformed in 1950, becoming known as the City of North York Squadron (which is now a suburb of Toronto), before disbanding for a final time in 1996.

My research has uncovered that there were 7 pilots from 411 Squadron who made “Ace” in their Spitfires, with 5 or more confirmed enemy aircraft destroyed in the air. We have already heard about Dick Audet, who I will talk about again in a moment.

Their scores against enemy aircraft are listed in the order: Destroyed/Probable Destroyed/Damaged

The Fate of Dick Audet

You will remember from Sortie 11, where we discussed Spitfire Ace pilots, that 411 Squadron’s top scoring pilot was Richard “Dick” Audet. He started his career as a Spitfire pilot with an incredible 5 enemy aircraft destroyed in just one mission.

Although Dick Audet did not fly in Spitfire ML295, he was a close friend and contemporary of many of the pilots that did. In this photo alongside Audet (red) are ML295 pilots Bob Cook (green), Bernie Eskow (orange) and Elgin Ireland (blue)

Unfortunately, Audet was later shot down and believed to have died when his Spitfire crashed, which was a very anticlimactic end to such a promising career. However, since writing that article I came across a rumour that Dick Audet had survived being shot down, only to then have been murdered.

After doing some digging, I found that in 1947/48 there was indeed an investigation into the potential capture and murder of Dick Audet. As the unlawful killing of a captured prisoner was against the Hague Convention (the pre-cursor to the Geneva Convention), the potential murder was considered a possible war crime.

The investigation was led by Major H Cleaver, who conducted an incredibly thorough and comprehensive study of the allegations, which amounted to 120 pages of evidence and notes. Major Cleaver managed to track down the crew of the anti-aircraft battery that had shot Audet down on 3rd March 1945 and followed the story from there.

During their interview the head of the anti-aircraft crew confirmed that they had picked up a pilot in early March 1945, after having gone to the site where a Spitfire had crashed near Coesfeld in Germany, not far from the Dutch border.

They then transferred the pilot to the town of Gelsenkirchen-Buer, where he was interrogated. Although he didn’t reveal any information beyond his basic details, the man conducting the interrogation remembers that the pilot’s name was Audet and that he was Canadian. Unable to get further information from him, Audet was meant to be transferred again to Dortmund, although no one – perhaps conveniently – remembers who took him away. After this, the trail goes cold and Audet is never seen or heard from again.

The last known movements of Dick Audet, from his crash and capture at Coesfeld (1), to being taken to Gelsenkirchen-Buer (2) where he was interrogated, to his reported final destination of Dortmund (3)

As there was no other Spitfire pilot shot down in the area at that time and particularly with his name and nationality remembered, it does make it a strong possibility that Audet did manage to survive his crash landing and that he was taken prisoner.

Another Allied pilot in captivity at the same time, recalls a story of another captured pilot jumping from a train he was on in an escape attempt. Despite a thorough search by the Germans, the escapee pilot was never found. Although the Allied pilot was not aware of the name of the pilot who had jumped from the train, with so few pilots captured so late in the war it is possible the escapee was Audet and the attempt certainly matches his daring character.

The findings of the report however are inconclusive, as there was no direct evidence of murder, or even a body found to return to his family.

Having the benefit of access to decades of post-war research, I was able to conduct my own research and discovered a decidedly grizzly possibility. On 27th February 1945, a British Lancaster bomber pilot, Flight Lieutenant Norman Coatner Cowley, had been shot down. He had managed to parachute safely away and landed in the German town of Gelsenkirchen-Buer, which was the same town where Audet would be taken to on 3rd March 1945 – just 4 days later.

Cowley was picked up by the local Volksgemeinschaft in the town, who were the “People’s Community” of local Germans. After taking Cowley captive, these civilians proceeded to beat him to death with their homemade clubs.

Coinciding with this, the local police in the same town had been given permission in February 1945 by the head of the “Safety Police” to allow them to execute anyone without reason. This meant that when Audet was brought to the area, the police and gestapo were already in the midst of committing the mass-murder of their prisoners and forced labourers.

In 2019, the Gelsenkirchen-Buer police station placed a plaque commemorating the wartime victims of their force.

The last sentence of the plaque translates to “For an unknown number of people, the path to their death began here”

With Audet being brought into this environment, where indiscriminate murder by civilians, police and soldiers alike was not just commonplace, but also encouraged, it is not difficult to imagine he met a similar fate.

Whether Dick Audet was murdered or died in an escape attempt, and who was guilty, we will likely never know. A very sad loss of an incredibly talented pilot.

His death highlights the righteous cause of the Allied war effort and the immense risks that the Spitfire pilots faced, even when fighting a broken enemy that was near defeat.

S/L Newell clearly believed Audet did not survive the initial crash. You can almost feel the tears in his eyes as he writes it:

“A gloomy and very expensive day for this Squadron our ace F/L “Dick” Audet on the 2nd and last mission of the day was hit by flak from a rail siding when the Squadron was attacking a train. His aircraft burst into flames and went straight in from 500 feet it crashed into a wood. “Dick” was not seen to get out. Modest and inspiring he was just one of the boys and a real credit to Canada and her R.C.A.F. His daring and boldness led to his presumed death. He was a leader, respected and admired by all. Just one swell guy. J20136 F/L R.J. Audet D/F.C. enemy aircraft destroyed 11 1/2, probable, nil, damaged, 1. Total operational hours 107:45, Sorties 83.”

There were 11 pilots that flew in Spitfire ML295 during her 67 Sorties.

It was fashionable at the time for each pilot to use a nickname, which I have listed. Given in brackets is the number of missions each pilot flew in ML295:

All but one of ML295’s pilots survived the war.

After having completed his tour of duty, Flying Officer Len Dunn volunteered for a 2nd tour and joined 401 squadron. On 17th April 1945 he attacked a train in Germany that was carrying petroleum.

Flying at a low altitude, Len successfully shot up the train, however as it was destroyed the train violently exploded in a huge blast which engulfed Len’s Spitfire. Sadly the Spitfire, along with Len, did not survive.

Just 3 weeks before the war in Europe would end, Len died aged 22, leaving behind his wife in Saskatchewan, Canada. Like many of the pilots that died, he has no grave, instead his name is engraved on panel 279 of the Runnymede memorial, just west of London.

The restoration of the Spitfire ML295 continues to make good progress. It is quite a privilege to see the Spitfire in person and while it is still in development. You can really appreciate the love and attention that is going into the restoration and how faithful it is.

The current progress of the restoration of Spitfire ML295 at the Biggin Hill Heritage Hangar. Since I last saw the aircraft the engine has been fitted, along with the undercarriage and the wings, as well as additional paint applied to the body

The engine is a war time Rolls-Royce Merlin V12 built by Packard. All the original detailing, such as the red maple leaf on the side of the cockpit will be recreated

Engineers inspecting a Packard built Merlin V12 engine. Made under license from Rolls-Royce, the Detroit based factory built more Merlin engines than any other single factory during the war, at over 55,000. Packard’s engines powered not just Spitfires, but Hurricanes, Lancasters and Mustangs too

A view through the empty cannon port on the wing, looking at the inside of the Spitfire’s monocoque airframe

We will take a look at the incredible story of the first pilot to fly Spitfire ML295, Tommy Wheler. See you there.