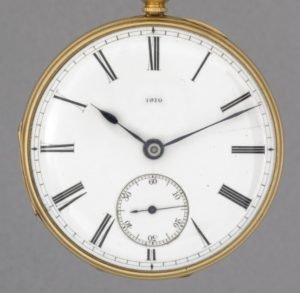 The British Watch and Clockmaking Company

In 1800 Britain produced around half of the world’s watches, however by 1840 for every one English watch sold the Swiss were able to sell ten.

This is the fascinating story of the attempt to remedy this situation. With the ambitious goal of leap frogging Britain back into the leading position as the centre of horology.

Backed by some of the greatest names in watchmaking of the day, in 1842 the British Watch and Clockmaking Company was founded at 75 Dean Street in Soho, London; with the aim of mass producing watches with interchangeable and replaceable parts.

Curiously it was a Swiss national, Pierre Frederic Ingold (1787-1878), that aroused this nationalist feeling when he came to Britain with the idea of building such a company.

He had already tried and failed in both France and Switzerland to inspire the same enthusiasm. Indeed a venture had started in Paris in 1838, but less than a year later he found himself running away to London chased by stories of slander and bankruptcy.

With him, Ingold brought an array of inventions and machinery. His dream, despite not being able to speak English, was one that he was able to convince many of; the ability for these machines to produce 300 watches a day – up to 100,000 a year – which at that time was half of Britain’s total output. All of this was promised to be completed under one roof requiring only unskilled workers to operate.

There was a set of 25 machines for each production line, each one performing its own specialised task. It was claimed that each set of machines would replace 150 men. Due to the mechanised production processes the speed of watch manufacture was expected to be not only faster, but up to 30% cheaper than the hand-made methods in use by the rest of the industry.

To begin this venture, some of the best and brightest of England’s watchmaking industry were involved. Many influential scientists of the time, including Charles Babbage who would later go on to invent the world’s first computer, were called in to vouch for the ingenuity of the machinery.

It is a modern idea of a watchmaker as a lone figure in a darkened workshop. The more realistic view is that these were entrepreneurs and industrialists who just happened to be in watch business. Ingold’s idea to produce watches in such a quantity and for such profit – they promised a net return of 30% of investment per year – was very appealing.

John Barwise and Thomas Earnshaw Junior took up the positions of operations directors. They were flanked by: Anthony Vieres, Thomas Hewitt, Sigsmund Rentsch and Mr Addison who served with them on a supervisory board. The Dukes of Chatelherault, Brandon and Hamilton offered their patronage, and some 84 British companies had committed themselves as agencies. Ingold was to serve as the superintendent.

Their first task was to raise the required capital of £250,000. This is around £9 million in today’s money ($14 million). A considerable amount, but based on their support and the potential returns, a sum that should have been achievable. After their hope of reaching this sum, they had ambition that a further £250,000 could be raised soon afterwards.

But it was their scale of ambition that was to be their undoing. Britain already had an established watch industry. This relied upon small groups of highly skilled and specialised craftsmen working by hand creating precise and expensive timepieces. The idea that machines would put them out of work terrified them and they viewed mechanised mass-manufacture with great hostility.

The British Watch and Clockmaking Company therefore posed a huge risk to their livelihood and they grouped together; notably under the banner of the Worshipful Company of Clockmakers, to make sure it would not succeed. They too were entrepreneurs and industrialists, but their labour was done mostly by hand using time-honoured designs and techniques.

So they petitioned parliament to try and halt this mass-manufacturing monstrosity before it could get started. They succeeded, and the British Watch and Clockmaking Company was denied the ability to raise the capital they required. You can read the fascinating story of the House of Commons Debate here.

Undeterred the company went ahead anyway. Perhaps in the hope that they could make their money back sooner, or maybe they thought that they had come so far and promised too much to give up at this point.

We know that they did produce watches; a piece from the May 1890 edition of the Horological Journal states “Watches in large numbers, and to a high degree of merit, were for a time produced”. In the Summer edition of the Antiquarian Horology of 1990, R.F Carrington, who has completed most of the known research into the company, believes that the total amount of watches manufactured was between 2000-2500.

The miraculous inventions were just not able to churn out as many as they had hoped. It appears that the mass-produced machined parts still required the time-consuming, and expensive, efforts of finishing by hand.

The enterprise was further hindered after one of the founding members, John Barwise, died. This was following the House of Commons debate and so the trauma of the disappointment may have been too much; he was 86 years old. His son, also named John, took over his responsibilities.

They struggled on for 3 years until 1845 when they ran out of capital and closed for good. It seems the company petered out as the initially enthusiastic backers started to withdraw their support.

Despite the company’s name, it is not thought that they ever expanded into clockmaking.

So why did the company fail? There are four main reasons:

After the company closed Thomas Earnshaw Jr. went back to selling his father’s chronometers. Pierre-Frederick Ingold, now bankrupt, travelled to America; in the hope that this new nation might be more open-minded to his ideas.

It is frustrating to have had Britain’s last major hope of the 19th Century battered so brutally. With the aid of hindsight the extreme myopia of the established industry is all too evident. The people that thought they were saving the British watchmaking industry were the ones who ended up destroying it.

The world-wide watchmaking industry had changed, the method of manufacture had changed and the customer had changed. British watchmakers were still excellent at what they did; but the common man could not afford to buy what they made, and they stubbornly refused to adapt. Both America and Switzerland were able to view the situation with fresher eyes that were not clouded by hundreds of years of tradition and pride. They gave people what they wanted; cheap and reliable watches.

50 years after the company’s closure, Britain sought again to break into the market of mass-manufactured watches, and looked to successful American companies as their model. Ironically these American companies were setup using designs of machines and methods that are now largely credited to Pierre-Frederick Ingold’s efforts and ideas.

Charles Darwin I am sure could have used the episode as a prime example of evolution in action. Like the Woolly Mammoth, the British Watchmakers were grand, proud and majestic. But they were from a time that had passed and as soon as competition arrived they retreated to their strongholds, battened down the hatches and tried to continue as normal. They wished the ice would return and these new antagonists would retreat, but it did not and one by one they died out.

Never would there be quite so much promise of a British watchmaking revival. The whole episode with the British Watch and Clockmaking Company only entrenched the established workshops in their protectionist Luddite beliefs. In 1858 the British Horological Institute was founded with the purpose of protecting what little there was left.

Bad luck, resentment and obscurity hounded the restless Pierre-Frederick Ingold until he died in 1878. His idea of mass-manufactured machined watches would live on however, and both America and Switzerland’s stories of factory built timepieces for the professional classes can be traced back to his industrious ingenuity.