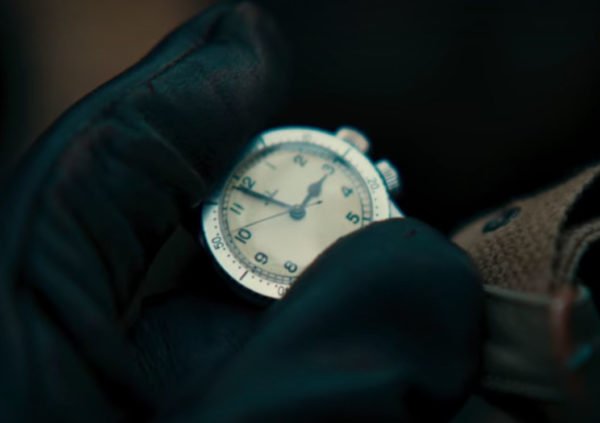 In this Sortie, we’ll look at the history of the original Spitfire pilot watches that inspired “The Few”, have a glimpse at the progress that is being made on the watch, and have a quick introduction to the watchmaker who is bringing the modern watches to life.

If you missed the last Sortie, you can see that here.

Like a lot of pieces of kit issued to the military, there wasn’t a standard issue watch that every Spitfire pilot wore. Some would wear their own watches, or types issued to other military branches, but there is a general consensus that there are two styles of watch that were the most popular and common.

Introduced in 1940, this Spitfire pilot’s watch was built by Omega. The watch’s dial and bezel were designed to be as simple and easy to read as possible. It is sometimes called the “Weems” watch after the designer Philip van Horn Weems. It’s also small by today’s standards, at only 33mm in diameter.

The watch had two distinctive features – the large bezel and the second crown at 4 o’clock. The design was heavily influenced by the limitations in technology when the watch was created; marking the design as particular to this period of history.

The CK2129 featured as the watch worn by the Spitfire pilot in the film Dunkirk, played by Tom Hardy

The numbered bezel that sits on the edge of the case is used to record set periods of time of up to an hour.

Using a bezel to record time was of huge value to a Spitfire pilot. For example allowing them to navigate (fly at 250mph SE for 10 minutes) or measure mission time (fly escort for 40 minutes then return home).

The bezel is turned so the minute hand lines up with 60, after 14 minutes the minute hand points at 14 on the bezel. This is independent of the actual time and far quicker than to manually work out how much time has passed between 2:49pm and 3:03pm for example

In a modern watch the bezel is usually fixed in place with a tension spring and only rotates clockwise, ratcheting around on another spring. This unidirectional travel means that time is deducted but not added if the bezel is accidentally knocked. This is very important if you’re flying; as it’s far better to have 5 minutes more fuel than less.

In 1940 however this mechanism had not yet been invented and so on the CK2129 the bezel freely rotates in both directions. To use the bezel you would turn it to the correct position and turn the crown at 4 o’clock, which would screw it down. As the crown screwed in a small spring was moved into one of the grooves on the side of the bezel, fixing its position. To unlock the bezel the pilot would unscrew the crown to allow it to turn freely again. This method eliminated the risk of accidentally knocking the bezel.

Both the CK2292 and CK 2129 watches have relatively large crowns. This allows a pilot to operate the watch when they are wearing their thick pilot gloves.

Hopefully you’ll agree that of the two watches the CK2292 is a nice looking vintage style, but the CK2129 is something very special and very particular to the time period and its usage.

The Few is a watch designed and created by myself, Colin Andrews FBHI.

Being one of the few watchmakers that has handmade my own watch, I had always dreamed of making a series of watches for the public; and so when the rare opportunity to work with the restoration of a Spitfire arose, I jumped at the chance.

If you’re interested, you can read more about me here.

The Progress of The Few

One of the biggest differences between creating a one-off watch and a series is that everything must be consistent and interchangeable. So a vital process has been to create accurate technical drawings of the watch and its parts; as each exact curve and line needs to be defined.

I am creating a modern watch that is an homage rather than a duplicate of the original. This has allowed me to tailor some of the key features, including:

With the draft design complete, the pencil and ink drawings are translated into a computer aided design package (CAD). This will allow for a virtual working model of the watch to be created, where function and tolerances can be checked, such as; do the hands turn freely without touching the glass, does the bezel spring locks the bezel correctly and is the watch water resistant.

When the design of the watch is finalised, the CAD model will then be used to 3D print a prototype.

We’ll take a look at what it took to be a Spitfire pilot, how they used their watches and see some 3D printing.